For historic car racing enthusiasts the event held on the estate of Lord March, in England, is truly an appointment not to be missed - and this year there’s going to be a double celebration 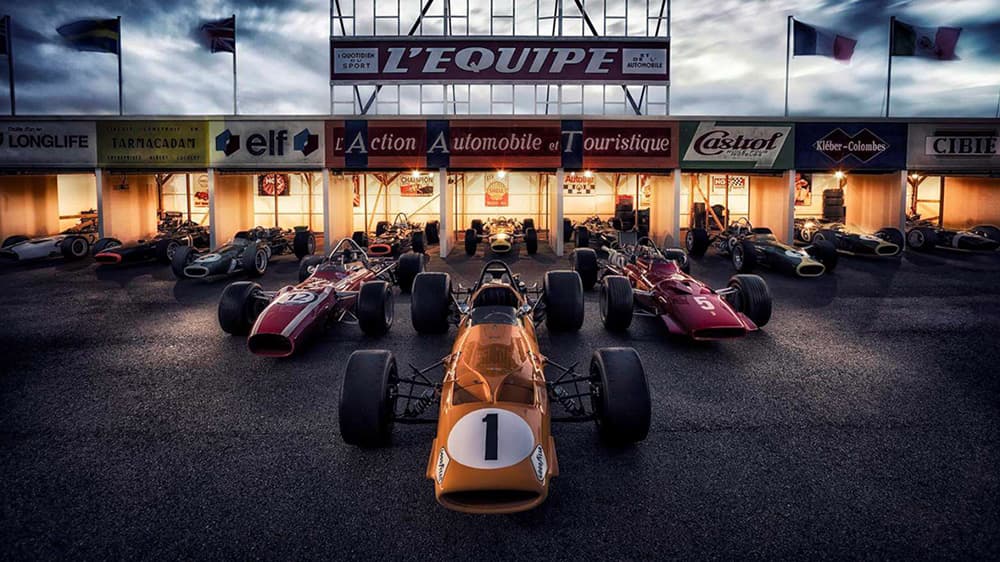 The time has arrived to dust off the 1950s flared skirts and tweed jackets and trousers. The Goodwood Revival Meeting, the third and last motor sport appointment of the year on the estate of Lord March, is about to begin. And, as always, for three days the calendar will go back in a euphoric return to the era when the famous Goodwood race track in the south of England was in its heyday, between 1948 and 1966. This historic motoring event in period costume - the world’s largest - will be staged this year from 7 to 9 September. And this time there’s a double celebration: for the event’s first 25 years and for Silverstone, toasting its 70th year. For this reason all the decorative installations will evoke the atmosphere of the legendary race track in Northamptonshire, which opened with its first official race in 1948. But what about the cars? This time the mix promises to be even more exciting, since the anniversary of the Revival will bring together around fifty winners from today and the past with a number of daily parades on the track. Between races, participants in the parades will include Jim Clark's Lotus-Climax 25 and the ERA A Type R3A once raced by Englishman Raymond Mays, one of the main developers of English Racing Automobiles.

And, talking of British racing teams and cars, this Revival will be particularly honouring the Rob Walker Racing Team from the world of Formula 1, the founder of which was an heir to whisky maker Johnnie Walker. As for the illustrious participants who will be driving in one of the weekend’s many “wheel-to-wheel” battles, the list of names is very long indeed. They will include a distinguished debutant, the former Formula 1 champion Jenson Button, and the return to racing of John McGuinness - with 23 victories in the Tourist Trophy to his name - after his accident in the 2017 North West 200.
There will be 12 trophies in all, with the spectacular Kinrara Trophy leading off on Friday afternoon. The start line will be graced by a grid of some of the world’s most sought-after cars, which will race for an hour. This collection of beasts, including Ferrari 250 GT SWBs and Jaguar E-Types among others, are so exclusive that they will attract a packed, non-stop pilgrimage of enthusiasts into the paddocks throughout the three days of the Revival. It’s no surprise that this race, one of the most recently introduced, has become one of the most eagerly anticipated events in just three years.

All the other challenges will take place, in a non-stop schedule, throughout Saturday and Sunday. First on the agenda is the Fordwater Trophy, with GT cars as raced at Goodwood from 1948 to 1954. In particular a large number of Jaguar XK 120s will be appearing, to celebrate the 70th anniversary of the model.
Two other crowd-pulling events will also be the St. Mary's Trophy (25 minutes), featuring around a dozen racing stars who at the wheel of some of the most evocative saloons from the 1960s, and the Royal Automobile Club TT Celebration, a classic at the Revival that, in one hour of high-octane racing, will involve a select elite of some of the most exciting, valuable and admired cars in history. Just to give you an idea, during last year’s RAC TT Celebration  a Ferrari 250 GTO agonizingly came off the track, wreaking enough damage to break the hearts of enthusiasts all over the world.

The motorcycle category will feature the customary Barry Sheene Memorial Trophy, a race divided into two parts of 25 minutes each and featuring a spectacular Le Mans-style start. On Saturday, at sunset, the day's events will close to the sound of Aston Martin DB3s, Ferraris, Maseratis and several “Big Cats”, as Jaguars are often affectionately called in their homeland, which will fight it out in the Freddie March Memorial Trophy. The trophy commemorates the endurance race that was held at Goodwood in 1952, 1953 and 1955. For lovers of pre-war cars, on the other hand, the Goodwood Trophy is the must-see event, reserved for the Grand Prix racers of the 1930s. While the Ford GT40s, the Lolas, the Lotus 30s and the McLaren M1Bs will be unleashed in the Whitsun Trophy. Saturday's programme also includes a not-to-be-missed auction of memorabilia and vintage cars connected with the meeting. This year a number of special British cars will go under the hammer of Bonhams auctioneers, including a Rolls Royce Phantom IV State Landaulet - used by a butler of the royal family for over forty years - at an estimated value of two million pounds sterling. For more information and live streaming of the races, go to goodwood.com.