This year the GTspirit Tour started and finished in the Austrian mountain resort of Kitzbühel and Pirelli was there to get a taste of the action.

The participating teams brought a bright and wide selection of cars to the start line including a range of AMGs, two Porsche Cayman GT4s, Jaguar F-Type and a Mercedes-Benz G500 4x4². A very special guest is one of the few people who can claim he has a car named after him: two time DTM champion Marco Wittmann with his BMW M4 DTM Championship Edition.

The event kicked off with a get-together dinner in the famous Rosi's Sonnbergstuben restaurant set in the mountains above Kitzbühel. We won't make it that late as the first driving day promises to start with one of the highlights from last year's tour. The start flag dropped on Friday morning with the first route cards directing all teams towards Austria's most famous and highest mountain pass: the Grossglockner!

Just the night before it snowed at the highest pass road in Europe but luckily the road is snow-free by the time we arrive with our rear-wheel drive sportscars on summer tires. After a few mandatory selfies and a quick drone video we continue down the South side towards the sunny lakeside town of Velden. On arrival a the beautiful Schlosshotel Velden a group of school kids await our arrival with cheering and clapping – seeing their joy is still one of my highlights of the tour. 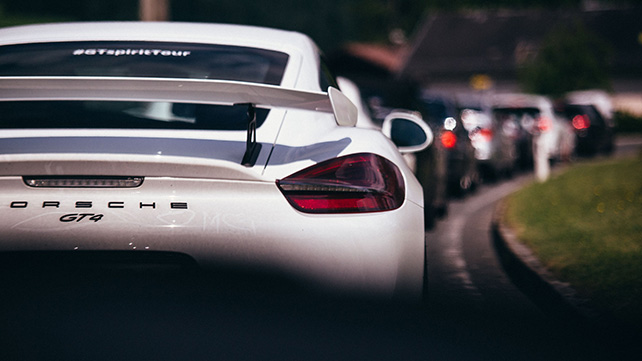 From Velden it is only a short drive to the Slovenian border. This small Central European country and home of Akrapovic is well worth a visit but this year we just cross it via the perfect highways on the way to our next overnight stop: the Hotel Esplanade in Zagreb. Built originally for the travellers on the Orient Express staying at this classic luxury hotel feels a bit like going back in time when travel was still a big adventure.

Following a great night out in Zagreb the program the next day is easy. Just a 3 hour highway drive from the Croatian capital to the capital of yet another European country: Budapest in Hungary. Often described as one of the most beautiful cities in Europe we took some time for sightseeing in the city that is split into two parts Buda and Pest by the Danube river.

The next morning we had to get up early for the most adventurous part of our tour. Leaving Hungary behind us for Slovakia, a country most participants didn't know well at all before our tour. The landscape on the way to our coffee stop changed from hills and fields to forests and then suddenly we arrived at a beautiful century old town in the middle of dense forests and hills. This town Banska Stiavnica is a UNESCO World Heritage Site and was one of the richest towns in Europe in the 1600s thanks to Silver Mining in the area.

Next up is Bratislava – capital of Slovakia – but before we got there we first had to navigate our way via a collection of waypoints. If you found them all correctly you end up on my favorite piece of road of the tour dubbed the rollercoaster road. Twisting up and down over a range of hills like spaghetti on a plate – so much fun!

The last day of the GTspirit Tour 2017 takes us back to Kitzbühel but the best might have been saved for last. Just a short drive from Bratislava we cross the border back in to Austria and shortly after Vienna we leave the highway behind us for the rest of the day. Soon we find ourselves all alone on one of the most beautiful roads in Europe. No traffic, a never ending combination of left and right turns going up and down small mountains with a great group of friends.

2,000 kilometer after we left Kitzbühel we return to the Grand Tirolia hotel. Smiling faces all around. We had a blast and we couldn't have wished for better weather and greater company!

For more information about upcoming events and the GTspirit Tour 2018 visit GTspiritTour.com

Read more
Related Stories
More than 13,000 tyres, 112 people and 64 competing cars
race
P Zero at the heart of the F1 Live action in London
road
An unlikely hero
race
MOST READ
Getting the show
on the road