After an accident that made the world gasp in horror last year, gutsy German racer Sophia Flörsch is back for another go at Macau. And she’s aiming to go all the way to Formula 1 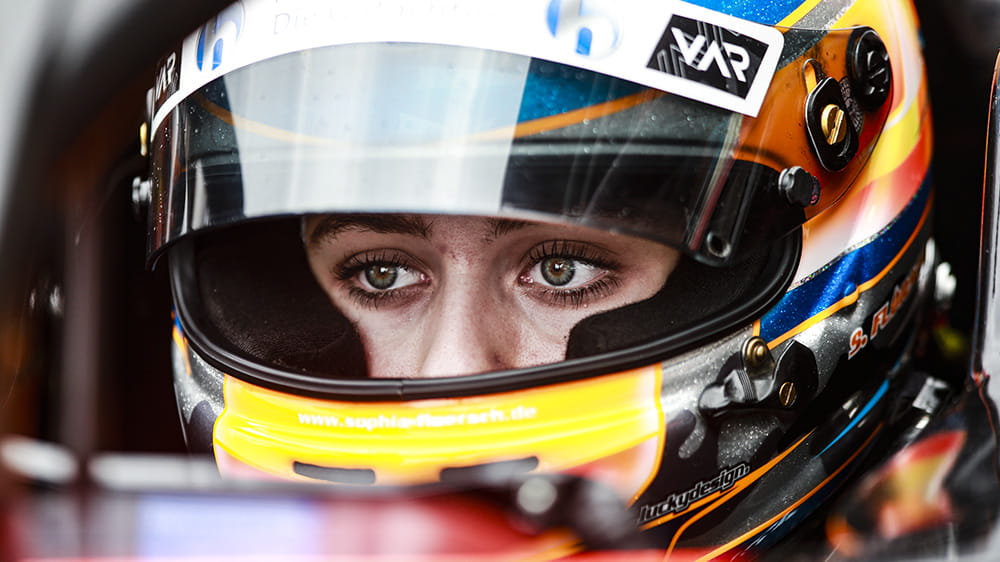 Last year at Macau, 18-year-old German racer Sophia Flörsch had an accident. But anybody watching that race will recognise this as a massive understatement. It wasn’t an accident: it was a plane crash. Sophia’s car tagged another competitor and she was launched into the air, the car barrel-rolling as it went up, like a scene from a movie. Then it slammed into a wall backwards before coming to rest behind the barriers. It looked like the sort of scene that nobody would walk away from.

But despite some fractures that healed with the help of extensive surgery, Sophia emerged relatively unscathed. She had an extended stay in a Macau hospital, then was sent home in a neck brace. It was only a few months before she was back training again, and back in a car. The accident didn’t even cause her to miss any races for her planned schedule. This year she’s been racing in the Formula 3  regional series – but she couldn’t resist returning to Macau: a track that she calls ‘the King of them all’.

She’ll be racing in Formula 3 again this weekend, but a very different sort of Formula 3. This year, the race uses the same specification of FIA Formula 3 car that is seen supporting Formula 1. And of course, these rapid cars – significantly faster than the old-spec F3 cars that used to race at Macau – use Pirelli tyres.

“So, in a way, I’m starting again: new car, with everything to learn once more,” says Sophia. “But I’m looking forward to the challenge. I’ve done a short test and my first impression is that these cars are really, really fast. Which means that Macau is going to be a lot of fun this year!”

It’s also going to be a valuable opportunity for Sophia to get used to the latest Formula 3 car in competition, as her plan is to do the full F3 championship alongside F1 next year. Her goal is single-minded: to get to Formula 1. It would be a monumental piece of history if she achieves it, as the last woman to race in Formula 1 was Lella Lombardi in the 1970s. More recently, Giovanna Amati occasionally drove a Brabham in 1992 but did not qualify, while Susie Wolff drove a Williams in free practice in 2014.

“I think that times have moved on and Formula 1 is ready for a woman to race now,” says Sophia. “I don’t know if I’ll be able to get there or not, but I’m going to give it absolutely everything to try.”

A strong result in Macau would certainly bolster her credentials, with the race having been won in the past by legends such as Ayrton Senna and Michael Schumacher (who Sophia knows personally). Because Sophia wants to make it to F1 the hard, traditional way: she’s not interested in W Series, for instance: the all-female racing series.

“In the end, they’re doing their thing and I’m doing mine,” she says. “But if you look at the W Series champion, she’s doing W Series again next year. Where’s the progression?”

Incredibly, Sophia almost forgotten about the accident that made worldwide headlines last year. “We didn’t complete the race last year: but never mind, we still learned a lot. People have been asking me a lot about that accident, and I guess that it’s normal, but it’s really not something I think about: in fact, when I see the video it’s like someone else was in the car. I’m just focussed on doing as well as I can this year.”

No doubt about it: Sophia has the DNA of a true racer. She genuinely thinks that her monstrous accident wasn’t a big deal. All that’s important is the next race. Her favourite bit of the fabled Macau circuit – a vertiginous blend of Monaco (with its tight confines) and Monza (with its high speeds) – is the esses after the hospital: a rapid piece of track where the car generates massive g forces as it flows from corner to corner.

A real driver’s piece of road in other words, when a car truly comes alive. Here in particular, Sophia says that you really notice the difference with the car on new as opposed to used tyres: the grip becomes sharper, the forces more extreme. Qualifying is crucial at Macau and stringing it all together over one lap is the name of the game.

“There’s no particular plan for Macau apart from the usual one: qualify as best as I can, then race as hard as I can,” concludes Sophia. “Then we’ll see what happens. It’s the sort of race that’s always impossible to predict.”

Here’s one prediction that we’ll make though. Sophia’s got exactly the right attitude to take her all the way to Formula 1. Keep a close eye on her.

Read more
Related Stories
Giancarlo Fisichella:
how to win a GT race
race
What happens in Vegas,
stays in Vegas
race
No Blancpain,
no gain
race
MOST READ
The Pirelli P Zero trofeo r: to the clouds with the Urus