Girls get on track

The latest initiative from world motorsport’s governing body, the FIA and its Women in Motorsport Commission, aims to help more young female racers go all the way to the top 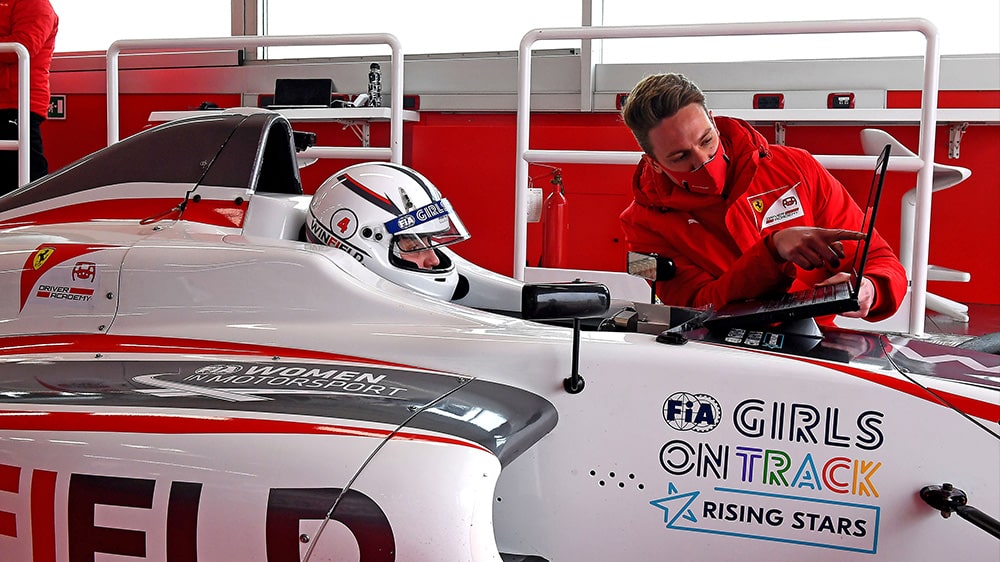 Female participation in motorsport has always been fighting against a tide of male domination. It’s been almost 30 years since a woman last competed in a Formula 1 race weekend: when Giovanna Amati entered three races with Brabham in 1992 but failed to qualify on each occasion.

While women have been strongly represented in sportscar and touring car racing for decades – from the exploits of Ellen Lohr in the DTM and Michele Mouton in Group B rallying in the 1980s, to the exploits of two-time IMSA champion Christina Nielsen and all-rounder Katherine Legge today – not so many have scaled the heights of single-seaters.

That’s why a number of promising initiatives have been put in place by world motorsport’s governing body, the FIA. One such scheme is the FIA Girls on Track – Rising Stars programme, a new initiative by the Women in Motorsport Commission which is aimed at bringing the next generation of female drivers into the sport, and more importantly, giving them a clear path to the top.

A key element in this road map is the partnership that Girls on Track – Rising Stars enjoys with the Ferrari Formula 1 team. In a knock-out style assessment programme, Girls on Track – Rising Stars picks out the most promising female talent – aged between 12 and 16 years-old – with the winner securing a place as a member of the Ferrari Driver Academy (FDA). The FDA has proved to be very effective in the past, helping drivers such as Charles Leclerc, and more recently Formula 2 champion Mick Schumacher, into F1.

Launched by the Commission  in 2020, FIA Girls on Track – Rising Stars quickly announced its ambitious plans for the future by securing a four-year collaboration with Ferrari, perhaps the most iconic and recognisable name in all of motorsport.

Two of the girls who shone during the assessment programme, eventual winner Maya Weug and 2019 Women in Motorsport award recipient Doriane Pin, believe that Girls on Track is the perfect platform to increase the number of girls coming into the sport.

“I was always at a race track and I watched my dad’s karting career since I was born,” said 16-year-old Weug, born in Spain but with Dutch and Belgian nationality. “When I was seven years old my brother and I started karting when we got a kart as a Christmas present. Since then, I’ve never stopped racing”.

Weug became the first ever female member of the FDA this year and has a clear aim of “being F1 champion with Scuderia Ferrari one day”. It’s a big goal but her prize, as part of the FDA, will be racing in one of the FIA-certified Formula 4 championships, the first step on the F1 career ladder.

Weug feels confident that her experience in the Girls on Track – Rising Stars programme will help her to find her feet, as she embarks on the next step in her motorsport journey. “I’ve learned a lot from the whole programme, on and off the track,” she explains. “In the Formula 4 training camp I learned to build up my confidence with the car. Thanks to Pirelli, I also got the chance to learn a lot about tyre management. And that won’t stop: I’m sure that in Formula 4 this year, I’m going to learn even more, together with the Ferrari Driver Academy.”

Doriane Pin had experience of the highest level even before getting to the final of the Girls on Track programme. Aged just 15, she took part in the inaugural FIA Motorsport Games two years ago, participating in the Karting Slalom Cup category. She too has F1 ambitions. “My dream is of course to be a Formula 1 driver and to fight with the best drivers in the world,” says Pin. “It's an incredible opportunity because there are only 20 of us selected among many very, very fast drivers, so it's a pride to be able to participate in this selection. It shows that we have our chance to get to the highest level of motor sport.”

The Girls on Track – Rising Stars initiative also has a partnership with Pirelli, which meant that a large part of the assessment focussed on understanding how tyres behave and how to manage the wear. Pin actually believes that this was the most valuable piece of the training. “After working hard with the engineers, I was able to put everything in place to drive the best lap possible and be consistent afterwards. If you start with new tyres and use them well after warming them up well, they are good for the next several laps. If you are careful and have good technique, you can use them in the long term.”

Throughout motorsport’s history, women have shown themselves to be just as competitive and determined as their male counterparts. But investment and society have often been the barriers to seeing them represented at the highest level. Girls on Track, as well as the wide-ranging Women in Motorsport Commission from the FIA, might just be able to turn the tide.