From steering wheel to microphone – via Macau

The lives of the F1 drivers are well-documented – but what’s it like being a Formula 1 presenter? 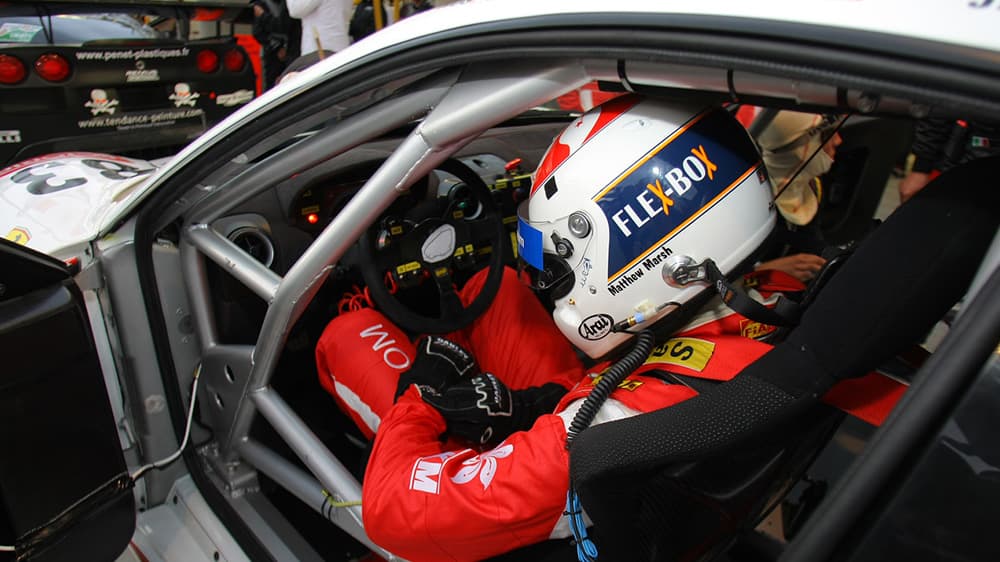 Frequent flyer
It’s tough enough being a Formula 1 driver by the time the end of the season comes around, but what’s it like being a Formula 1 presenter? Many of them are not just covering F1 but other races as well, and there’s one who even has another full-time job – and he’s had time to fit in a racing career too in the past. Meet Fox Sports Asia presenter Matthew Marsh: a Hong-Kong based Briton who is arguably the busiest man in the paddock.
He’s been presenting on TV for 25 years, but he has another job as well in motorsport sponsorship, matching potential sponsors to different motorsport series. This was what first brought him to Hong Kong back in 1990 – and he’s been travelling the world, chasing cars, ever since.
Matthew’s a familiar sight with his TV crew, but what most people don’t know about him is that he’s a former Porsche Carrera Cup Asia champion, well-established sports car driver – and Macau specialist. He’s taken part in the event eight times and been there in some capacity (either as a spectator, driver, or journalist) 27 times – missing it only once since he arrived in Hong Kong.
With Macau sandwiched in between the Brazilian and Abu Dhabi grands prix, Matthew spends much of November on an aeroplane – and although he loves Formula 1, there’s no question about what his favourite race is.

Spotting the difference
While the 50-year-old would never describe himself as a professional driver, he’s raced at a sufficiently high level – including with Pirelli in the Daytona 24 Hours, FIA GT Championship and Le Mans Series – to be able to use his experience and circuit knowledge when it comes to commentary. At the FIA World Touring Car Championship race at Macau in 2008, Matthew also became the first Hong Kong driver to score an FIA World Championship point.
So nowhere is this experience more relevant than when working at Macau. Once, after watching Edoardo Mortara (who has seven Macau wins behind him) Matthew asked him why he was taking a different line from the others on a certain part of the circuit. Mortara grinned, and asked him to keep quiet about that…
“Essentially, he’d worked out how with the camber of the corners, you need to sacrifice the first one a bit to get the most out of the second one,” points out Matthew. “So it’s just spotting little things like this that can help you in your commentating job. You get an appreciation of the driver’s mindset.”
Matthew works closely at Fox Sports Asia with Alex Yoong – a former F1 driver with Minardi. “Beating Alex to pole position in the Carrera Cup race at Macau in 2003 was probably one of the highlights of my on-track career,” says Matthew. “Alex passing me before the first corner brought me back to reality…”
When not covering F1 for Fox, Matthew is to be found brokering deals from his office in Hong Kong – or travelling out to meetings. In total, that adds up to more than 200 days a year on the road.

Superstar DJs
The downside to this life less ordinary, immersed in motorsport at every level, is all the time spent travelling – especially as most trips start and finish at Hong Kong airport. Macau is the exception, as he goes to work by boat. And it's the sort of place that creates memorable experiences: this year,
he was taught to DJ for the first time in his life by Pirelli’s well-known resident Chinese DJ, Emily, as part of a film sequence that opened the Macau Grand Prix coverage. It went well, but it's fair to say that Armin van Buuren – who dropped in on the Pirelli Hot Laps garage in Mexico recently – probably won’t be losing any sleep at night.
And now on to the final grand prix of the season in Abu Dhabi – another Pirelli Hot Laps venue – which is a relatively short hop for Matthew: a mere 10 hours by plane as opposed to nearly 20 for most of the European races.
“It’s been an amazing season,” concludes Matthew. “My favourite part was having my wife and daughter with me at Silverstone for the British Grand Prix. For me it was a six-week trip away from home – which is the tough part of this job – so having them with me for a while was amazing. But what I’m looking forward to most in Abu Dhabi is actually the conclusion of Formula 2. Can Alex Albon snatch victory from George Russell at the final round? With Lando Norris at McLaren, George at Williams and, hopefully, Alex to Toro Rosso, it looks like we’ll have the top three F2 guys graduating to F1 next year. That’s incredibly exciting for the future, isn’t it?”

Read more
Related Stories
The thrills, the passion, the glory. Pirelli in F1 until 2023
race
An ideal lab
on the final F1 track
race
Formula 1
coast to coast
race
MOST READ
Jacques Villeneuve,
the rising and setting of the son