F1 arrives in Russia: the future of sports

As Formula 1 heads to Sochi, the sport’s future in Russia seems to be in safe hands. But we’re not just talking about the circuit 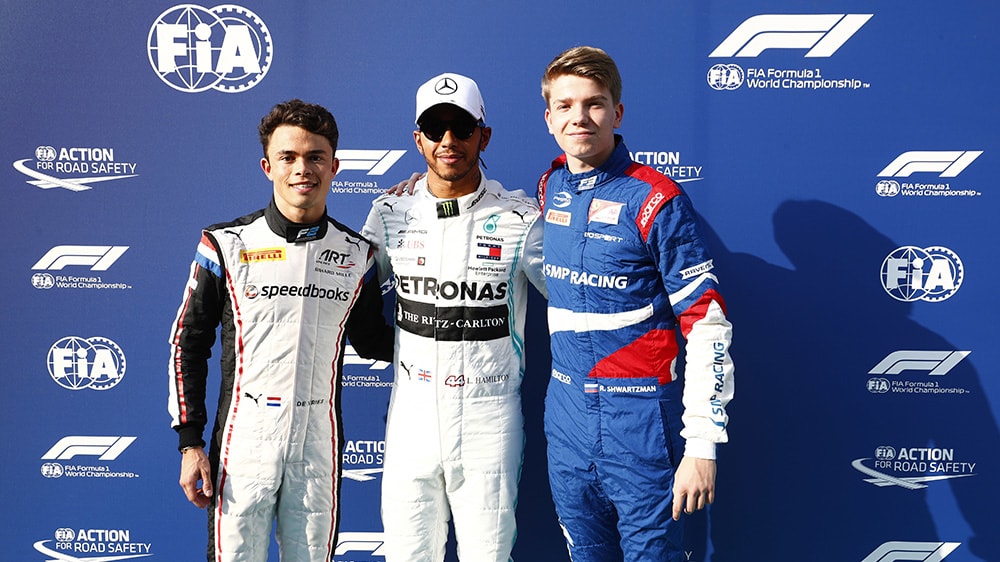 With Charles Leclerc on board until the end of 2024 at least, the future of Ferrari looks assured on the driving front, with Carlos Sainz also joining next season on a two-year contract. But the Scuderia also has no fewer than five members of its young driver programme competing in Formula 2 this season.

It’s only natural that Mick Schumacher – the son of seven-time Formula 1 world champion Michael – receives a lot of the attention from fans and the media alike. But another big name (especially this weekend) is that of Robert Shwartzman, aged 20, from Saint Petersburg.

A member of the Ferrari Driver Academy since the end of 2017, Shwartzman was the inaugural champion of the new-look Formula 3 championship in 2019. This year he made the natural step up to Formula 2, remaining with the Prema Racing team from Italy for a third season.

“My dream is to one day race in red for Ferrari,” he says. “And Italy is my second home.”

Fighting at the front

Formula 2, which once more features alongside F1 in Sochi, is traditionally not an easy championship for rookie drivers. Only Charles Leclerc and George Russell have managed to win the title at the first attempt in the last decade, but Shwartzman now has the chance to follow in their footsteps by winning back-to-back championships on the Formula 1 support bill.

In Prema’s F2 line-up he has gone head-to-head with Schumacher, who is in his second season in the series and naturally under greater pressure to perform. It was Shwartzman, however, who made the more successful start to the campaign.

He won the feature race at the Styrian Grand Prix in wet conditions, and then triumphed again at a dry Hungaroring one week later, where he demonstrated superb tyre management to take victory on the alternative strategy from 11th on the grid.

The introduction of 18-inch tyres to F2 this season – a size that will also be seen in F1 from 2022 – has provided an extra challenge for all of the teams and drivers, although Shwartzman seemed to get to grips with it particularly quickly.

It hasn’t all been plain sailing: Shwartzman had a tougher time at Silverstone – including a collision with Schumacher as they fought over the lead in one race. But he bounced back well and took a third win in the sprint race at Spa-Francorchamps to remain firmly in the title fight.

Heading into his home race – with two rounds in Bahrain still to come after that – Shwartzman is fourth in the standings, 21 points behind the leader. Everything is still wide open, with six races remaining.

The next step up

To win the championship he faces very stiff competition from Schumacher and others, but if he achieves his goal it would be little surprise if Shwartzman didn’t become the fourth driver to represent Russia in Formula 1, after Vitaly Petrov, Daniil Kvyat and Sergey Sirotkin.

Like Sirotkin before him, Shwartzman has the backing of the SMP Racing project that supports promising Russian drivers all over the world. His F3 title made him the first Russian driver since Kvyat sealed the 2013 GP3 series to win a major championship in the lower formulae: marking Shwartzman out as the best young prospect from a nation that is fast becoming a growing force in international motorsport.

Shwartzman has grown a lot in stature and maturity since his days racing against drivers like Lando Norris in karting and Formula 4. That personal development is continuing apace this season, which he said would be the toughest of his life following the death of his father Mikhail in April: another victim of coronavirus.

It was at Sochi in 2019 where Shwartzman was crowned F3 champion, subsequently presenting the Pirelli Pole Position Award to Leclerc – and where he will hope to return in the near future as an F1 driver. At Ferrari he is very highly thought of, and Shwartzman has already been linked to a drive at Alfa Romeo or Haas in F1 next year. The problem that Ferrari has when it comes to their junior drivers is that they are spoiled for choice: three Ferrari Driver Academy members (Schumacher, Callum Ilott and Shwartzman) are currently in the top four of the F2 championship.

Looking even further into the future, perhaps Shwartzman’s rise could help bring F1 to his home city of Saint Petersburg one day on the recently-built Igora Drive circuit, which has ambitions of eventually hosting a grand prix.

Either way, Russia and Formula 1 look set to go a long way together in the years to come.

Read more
Related Stories
F1 Mugello GP: history of the italian circuit
race
Monza:
first among equals
race
Montmelò Circuit:
milestone of the Formula One
race
MOST READ
The Pirelli P Zero trofeo r: to the clouds with the Urus