Monza has been on the calendar 69 times in the 70-year history of the Formula 1 World Championship. And it’s always been about speed 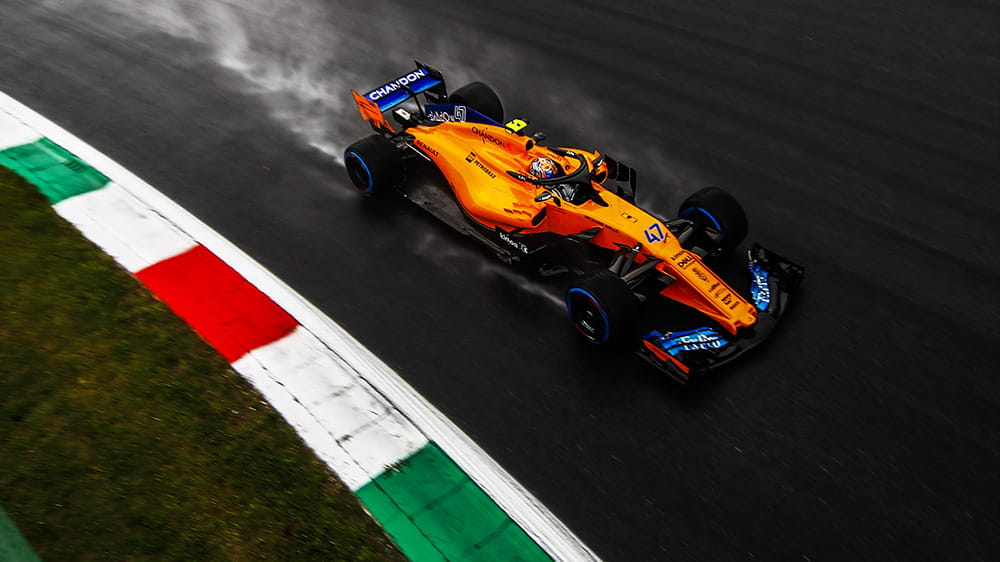 On Sunday 8 September, Monza will host the 14th race of the 2019 Formula 1 World Championship: the circuit’s 69th world championship race, which isn’t bad considering that this is ‘only’ the 70th season of Formula 1. Not even Silverstone and Monaco have been such stalwarts of the calendar. But Monza – built almost a century ago in 1922 – has always been there. And since then it has been an enduring symbol of absolute speed.

At Monza, more than at any other circuit, “going flat out at 300kph” is not just a turn of phrase. That threshold is in fact crossed three times every lap. At the fastest point of the track, right at the end of the pit straight, it’s by some margin: in 2005, driving a McLaren-Mercedes, Kimi Raikkonen reached 370kph in the race. In free practice during the same year, Colombia’s Juan Pablo Montoya got to 372kph. Even in today’s modern hybrid era, the 362.1kph top speed reached by Daniel Ricciardo’s Red Bull in the 2014 race is impressive.

MAY THE FORCE BE WITH YOU

Despite the challenges posed by these stratospheric speeds, Monza can actually be considered to be a stop-and-go circuit. Why? Those enormous top speeds are punctuated by heavy braking and chicanes, along with a few other corners that have written motorsport history. It’s fair to say though, with modern aerodynamics, they don’t present quite the same challenge as they used to.

The circuit is also completely flat in a geographical sense: there are no climbs or drops; none of the rollercoaster elevation changes or compressions that characterise Spa-Francorchamps, for example. The forces at Monza are mostly longitudinal – acceleration and braking – placing massive demands on both front and rear tyres.

At more than 360kph, reached at the end of the pit straight, the drivers have to rely blindly on the transmission and brakes to slow them down as quickly as possible to 70kph: the entry speed for the first chicane. Think about it: slowing down from around 360kph to 70kph means shedding 290kph. In the space of no more than 40 metres. It’s a technical and human challenge of the highest order.

And those chicanes at Monza aren’t really a matter of choice: instead they are an absolute necessity. In 1971, Englishman Peter Gethin won for BRM at a Monza that was devoid of chicanes, setting an astonishing 242.615 kph average speed throughout the entire race. That average speed record would remain a benchmark for more than 30 years. In 1971, Monza was essentially a high-speed loop consisting of fast straights linked by just a few corners.

On the straights the cars would line up closely behind each other, to benefit from an aerodynamic tow. Then, as the corners approached, they would duck out of the slipstream, hoping for the perfect slingshot to make an overtaking move . This meant that Gethin won not only the fastest grand prix of the entire last century but also the closest, with just millimetres separating the top five. Ronnie Peterson (March), Francois Cevert (Tyrrell), Mike Hailwood (Surtees) and Howden Ganley were all covered by just 0.61 seconds behind the victorious BRM, which won by a mere 0.01 seconds!

And then Monza changed. The chicanes were introduced and that had a profound effect on average lap speeds, as well as total race distance covered. However, this didn’t affect the peak maximum speed. And that’s how Monza managed to maintain its record-breaking magic. Following Gethin’s record, we had to wait 32 years for it to fall. Michael Schumacher, in his all-conquering Ferrari, won the 2003 Monza race at an almost unthinkable 247.585kph: nearly 5kph quicker than Gethin. It’s a record that still stands today. And then, in 2018, Kimi Raikkonen set the fastest-ever pole position in Formula 1 history, again for Ferrari: at 263.587kph.

BEND BUT NOT BREAK

At speeds in excess of 350kph, a Formula 1 wheel rotates around 2800 times per minute, or nearly 50 times per second. This generates extreme demands that have a profound impact on tyres: each of which has to deal with forces that are the equivalent of around 1000 kilograms. As the tyres are squashed onto the track surface due to downforce, the footprint increases and the part of the tyre that is in contact with the ground becomes notably deformed.

The tyre structure therefore has to be exceptionally strong, yet flexible at the same time to cope with this constant bending. Simultaneously, the top part of the tyre that isn’t in contact with the ground is subject to massive centrifugal force – but its shape doesn’t change by more than 1%. This is an incredible achievement, which all comes down to the low weight of the tyre and exceptional rigidity of the materials developed by Pirelli for Formula 1.