Five things you may not know about
the Lamborghini Super Trofeo 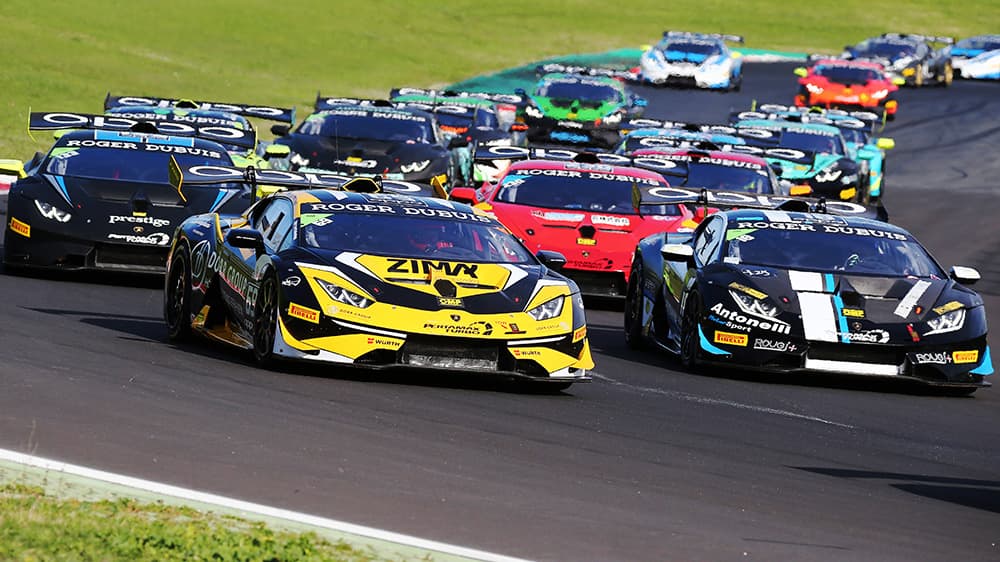 7418 track laps, 43 circuits, more than 240 hours of racing, and yet the Huracán has not had its fill of tarmac. These are some of the numbers of the first ten years of the Lamborghini Super Trofeo, now in 2019 in its eleventh edition, that has grown in popularity year after year, attracting ever more varied teams of professional and amateur drivers.

HAVEN'T WE MET BEFORE?

No fewer than 830 people have competed in the Lamborghini Blancpain Super Trofeo over the past ten years and some are well-known personalities from other sports. There are 11 former Formula 1 drivers (Enrique Bernoldi, Martin Brundle, Ivan Capelli, Johnny Cecotto Jr, Stefan Johansson, Nicola Larini, Andrea Montermini, Shinji Nakano, Tiff Needell, Scott Speed and Hans-Joachim Stuck) and there is Formula 1 engineer Adrian Newey. There is the DTM ace Frank Biela, alongside Didier De Radigues and Andrea Dovizioso of motorcycling fame. Driver Fabien Barthez was one of the best French football goalkeepers and Patrice Brisebois was a Canadian ice hockey player.

Although the track remains a predominantly masculine world, the presence of women has been on the rise in each edition of the Lamborghini Super Trofeo. From 2009 to 2019, 16 women have taken part in the competition, some of whom were experienced drivers with many kilometres under their belts, while others were up-and-coming talents. Like, Australian Caitlin Wood, who at just 21 years of age won several titles and set herself the goal of being the first woman to win the 24 Hours of Le Mans. She was joined by Carrie Schreiner, one year her junior, who has already earned her reputation as the most successful woman in German motorsport.

For very young drivers, the Super Trofeo is proving to be a fertile ground for showcasing their skills. Giacomo Altoè, born in 2000, was the youngest winner of the Italian GT championship in 2018 in a Huracán, making a name for himself on the Lamborghini Young Drivers Programme and securing a spot on the Lamborghini Squadra Corse. Another success story of the Lamborghini Youngster Programme was that of Dennis Lind, born in Denmark in 1993, who began his career in motorsport after having worked as a driver in a shipping company. He made his racing debut by winning the European and World Super Trophy 2016 titles and has been on the Lamborghini Factory Drivers team for three seasons now.

A METALHEAD AMONG THE PETROHEADS

Spectators at the Monza stage of the 2018 Super Trofeo noticed the presence of another famous character outside his natural habitat. It was Mikkey Dee, former Motörhead drummer currently with the Scorpions. He was there to support 20-year-old Simon Larsson and not to sign autographs. Motörhead was the name given to the Huracán by the young Swede, who had apparently picked the right band to combine his passion for engines with that for heavy metal.

Lamborghini launched a new protagonist for the 2019 edition of the Super Trofeo. The Collector Edition of the Huracán Super Trofeo was presented during an event at the Manifacture Roger Dubuis in Geneva, home of the haute horlogerie partner of Lamborghini Squadra Corse since 2017. The new version promises even better levels of safety, performance and aerodynamics, but it is on the appearance level that the inspiration shared by the Lamborghini Style Centre and Roger Dubuis is expressed to the best. The Excalibur Huracán Performante watch, the latest tribute of the Swiss manufacturer to Lamborghini and Pirelli, is depicted on the roof of the car. The watch picks up the colours and some elements of the Collector, such as the honeycomb motif on the dial and the strap reproducing the tread pattern of the P Zero Trofeo R tyres. Since 2017, Roger Dubuis has been working in a partnership with Pirelli Design to create haute horlogerie timepieces with rubber straps, containing inserts from Pirelli tyres that led to victory in real races.