The Blancpain GT Series got underway with a test and media session at Paul Ricard in France. This what we found out 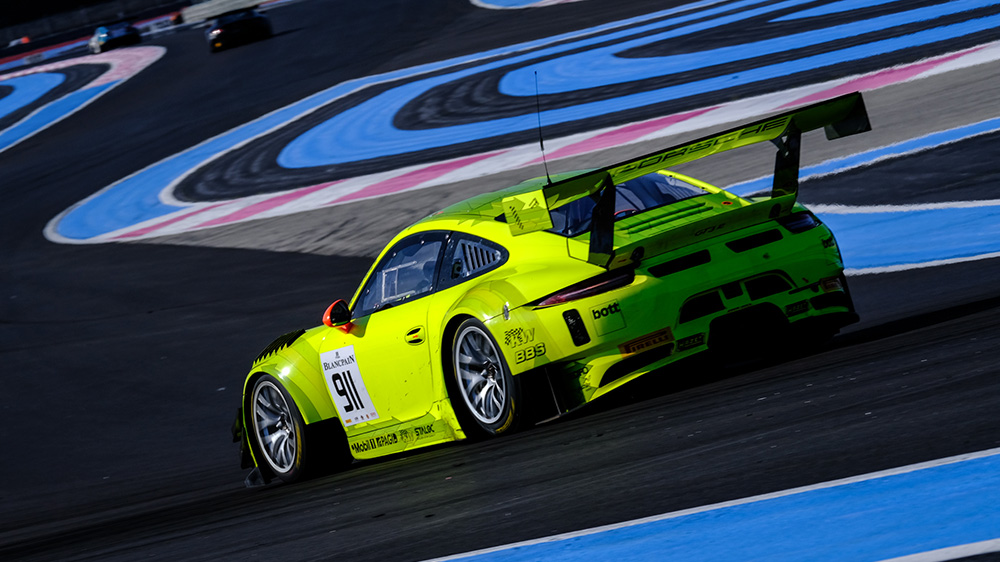 The Blancpain GT Series drivers got to discover their new cars – and updated P Zero tyres – at a two-day test held on the Paul Ricard circuit in the south of France: the home of the French Grand Prix. After more than 200 laps for many teams, here’s what we learned…

1. The 2018 evolution of the tyres are more driveable
The updated P Zero DHD2 tyre introduced for the Blancpain GT Series this year (as well as for many of the other global GT competitions where Pirelli is present) builds on the lessons learned from last year’s DHD, although it is an evolution rather than a revolution. The aim was to make it more driveable, with a wider usage window, to adapt it even more closely to the ample range of circumstances that can occur in a 24-hour race, for example. And with such a huge array of manufacturers competing in GT races – 11 were represented at the Paul Ricard track – getting the same tyre to work equally well on cars with very different architectures and downforce levels (not to mention on all the different circuits visited) is a big job. For the Blancpain GT Series, there is just one compound for the entire season: harder work for the tyre manufacturer, but more cost-effective for the competitors.
The 2018 concept started off with an evolved rear tyre, to deliver added stability and working range from the part of the car that does all the work in terms of delivering traction, then the front tyre was redesigned to maintain the same balance that drivers appreciated last year. The result is a tyre that feels similar to drive but better, allowing the drivers to push harder for the entirety of every stint.

2. Speeds have increased – from what we can see so far
The recent Formula 1 test in Barcelona resulted in headline lap times that were about a couple of seconds faster than last year. In GT racing, that gain is even bigger – about three seconds, from what we could see at the Paul Ricard test. Of course, the circuit has been improved in several places, notably with new asphalt in preparation for the French Grand Prix and this is the main reason why. But that’s still a big upturn in pace, thanks also to the development that has been brought to the new cars as well as a bit of added performance and versatility from the latest DHD2 tyre. The calibre of the drivers is another important factor: with several manufacturers entering professional line-ups, they tend to push each other harder.

3. More manufacturers are getting involved
There were a few new names at the Blancpain GT test, such as the brand-new Lexus run by Emil Frey (which boasts some top-level drivers, including former Spa 24 Hours winner Markus Palttala) and the equally new Bentley Continental GT3, making its first public appearance at Paul Ricard. With Porsche having an increased presence too, fielding a regular entry from Le Mans-winning team Manthey Racing, as well as the regular cars from Aston Martin, Audi, BMW, Ferrari, Lamborghini, Mercedes and Nissan (with another new car), more and more prominent top brands are becoming involved in the Blancpain championship – or are intensifying their engagement. That’s bound to make the competition even closer, and bear in mind that in Monza last year, the top 32 cars were covered by a second in qualifying. There aren’t many (or any?) forms of motorsport where every single manufacturer on the grid has a genuine chance of winning. But that’s normal for the Blancpain GT championship.

4. The competition is going to be closer than ever
Most of the manufacturers took a turn at top of the time sheets – which was no surprise. But what was perhaps more eyebrow-raising was the fact that both the professional and the amateur crews were on the pace with each other, reflecting perfectly the ethos of GT racing. You didn’t even need the latest car to succeed: a shock fastest time was set on the opening day with the privateer Bentley Continental (the previous model) in the hands of British GT regular Callum Macleod. “It was a very pleasant surprise to be fastest,” he said. “We never expected it, but we’re in a very good place with our car.”

5. The French Grand Prix is going to be something special
Paul Ricard might just be the most stylish venue on the calendar this year. For a start, it’s named after an aperitif. Secondly, the attention to detail is such that circuit owner Bernie Ecclestone (remember him?) had his favourite variety of English grass transported from Biggin Hill, to be transplanted onto the lawns near the pitlane. Thirdly, the organisers have created an art deco style poster that simply exudes Riviera chic. These might all come across as superficial details to some people. But in a world where many circuits resemble each other, such individuality is important. There are even (elegant) building sites extending the paddock and creating a new media centre. Come and take a look when the Blancpain GT Series visits Paul Ricard again at the beginning of June.