Felipe Massa,
Brazilian boldness
with 14 seasons of service in F1®

Roberto Boccafogli met Felipe Massa, one of the most senior drivers still competing, shortly after the opening of the Formula 1® World Championship 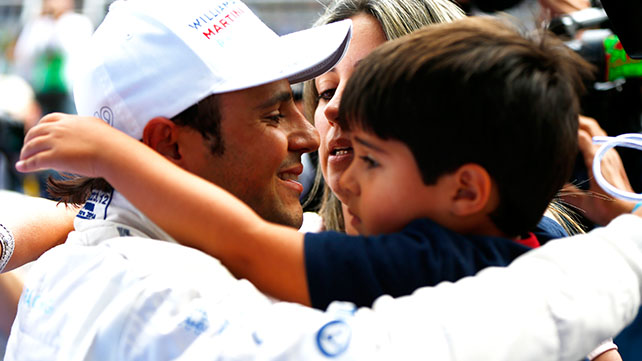 What are your feelings at the beginning of this new season?
“I am getting older, I am more experienced. But I am sure this happens to you as well! (he laughed) It is all about learning new things, like how to keep on fighting. I am happy to be here: ultimately, it is what I always wanted to do. This is my fourteenth world championship: it is a pleasure. There is something new every year in F1® and plenty to learn. This year, for instance, we will have three tyre compounds instead of two. It is challenges like this that keep you young.”

Three compounds instead of two for each race. What are the biggest changes this will bring?
“I think the biggest change will be on strategy level. The softest compound will always be picked for qualifying, that’s normal. But the choices during the race will be trickier and many variables will need to be taken into account: it will be very interesting. Maybe the change will not be huge, but we will definitely see something new.”

What needs to change on your Williams for you to be competitive again like at the end of the 2014 championship, for instance?
“We need more downforce. We must be more effective on slow corners. With more grip on bends you can exploit your tyres better and make them last longer. That is the crucial factor to be really competitive. We were aware of our weaknesses and for this reason we stopped developing the 2015 car early: we stated focusing on this year’s one right away. We are positive. Of course, we need to see how much everyone else has also improved.”

What did you learn from the first testing in Spain?
“We had a few problems during week one. The usual silly problems of a new F1®. Week two was when testing really got underway. Only at the end of the last tests we will know where we really stand with our car. But things get really clear only during the first race when everyone unleashes their true potential.”

Some say that today’s F1® cars are too easy to drive. New drivers can go fast right away. But when you started it was different...
“No, I must disagree! Sure, it used to be physically tougher. We drove lighter cars and could refuel during the race: we were nearly always at the limit, like during the qualifying sessions. Physical stress was very high. It was more tiring. Today’s races are more technical than physical. You need to take tyres into account. It is a different, less aggressive way of driving. But that’s a far cry from saying that today is easy... Why don’t you give it a go?”

So it is not true that a young driver after practising for hours and hours on a simulator can go very fast right away?
“I believe it is not. A very talented driver can be fast right away in the qualifiers. But it is different during the race. Over the years, I have seen plenty of young drivers who were astonishing in the qualifying sessions and then were out after ten laps during the race because they had finished their tyres. And they were fast as well: but they used their car and the tyres too much. They burnt too much fuel. The race is much more technical: it is not just about taking competition head on. And it is not that easy. No, it isn’t.”

Who are the most interesting new drivers today?
“Let me think... Max Verstappen who debuted in 2015 had a good season. But his team mate Sainz was also successful. Of the younger drivers with a little more experience I think Ricciardo, he is a very good driver. And then there is my team mate, Bottas: fast, strong and competitive.”

Can we expect any new talents from Brazil?
“I am not sure who could be the Brazilian champion of the future. There is Pedro, Nelson Piquet’s youngest son: he won everything in Formula 3 at home, two titles. He is very strong: let’s see what he will be able to do in Europe. It will be an important trial for him: we will see if he is ready for Formula 1®.”

What about the rest of the car racing scene in Brazil?
“Stock racing is the most important championship in Brazil. There are many good drivers and the level is high even compared to other international championships. You know all about it: the tyres are Pirelli. I think it will be the only interesting championship for a while: the economy in Brazil is not great and conditions are not ideal to develop motor sports. I experienced this myself: I started the Formula Future but there just were not enough drivers. Pity, because the cars were interesting and the championship was one of the lowest cost in the world.”

2016: The Rio de Janeiro Olympic Games...
“Ah, I would love to go there. I have never seen the Olympics in real life. I love sport. I like the spirit of such a great international event. With all the world watching. I would love Brazil to organise a spectacular event. The location is the most beautiful in the world: I hope the organisation will be at the same level. It is not an easy task for any country. I really hope we will put on a great show for the world.”

Read more
Related Stories
If you build it, they will come
race
Another victory for Pirelli tyres!
race
Formula 1®: here is how the racing drivers train
race
MOST READ
Getting the show
on the road