The big motorsports spectacle at the Nurburgring 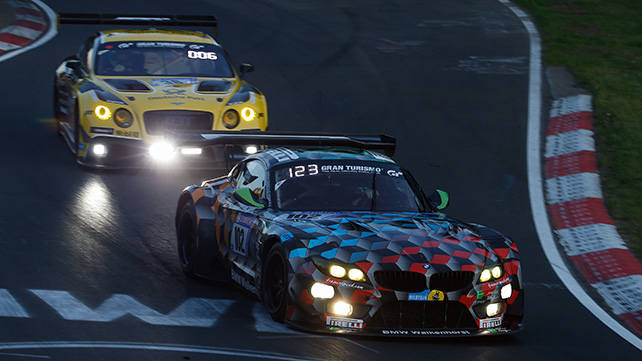 Once again it was gigantic, the annual balls to the wall-party in the so-called Green Hell. From 25th to 28th May more than 200,000 motorsport fans celebrated the 45th ADAC Zurich 24h race at the Nurburgring. The race ranks close behind the major highlights in international motorsports, the Formula One Grand Prix of Monaco, the Indy500 or Le Mans. Only a few racing events worldwide are even greater. This year's edition of the classic brought sunshine and outside temperatures of up to 30 degrees Celsius but also torrential rains partially. Or the combination of both, towards the end of the race sometimes even in the same lap. On the track a total of 173 racing cars competed in the numerous performance classes of this unique competition for places on the podium. Overall Pirelli supported nine teams and supplied them with a total of around 1,500 P Zero tyres.

The legendary circuit, composed of the Nordschleife and the Grand Prix Circuit, is record-breaking 25.87 kilometres long. Over this distance it really stretches the drivers, vehicles and tyres to the limit. Heart of the myth Nurburgring as the hardest circuit is the Nordschleife, also called the Green Hell. This name stems from serious accidents that had cast a cloud over a number of races until the mid-1970s. Several Formula 1® drivers lost their lives there. The serious accident of Niki Lauda on 1 August 1976 meant the final exit for the Nordschleife as a Grand Prix track. In order to meet the safety requirements of Formula 1®, a modern, significantly shorter circuit was built which was inaugurated in 1984. The first Formula 1® race on the new course took place on October 7, 1984 and was won by Alain Prost (McLaren). Right behind him the unforgotten Michele Alboreto (Ferrari) came home, followed by Nelson Piquet (Brabham) and Niki Lauda (McLaren). Great names in international motorsports, which alone represent ten Formula 1® World Championship titles. All along the best drivers have competed on this ultimate circuit, but for the Nordschleife there was no point of return to Formula One.

At the 24h races, however, the narrow Nordschleife, surrounded by hedges, is still an integral part. During a lap, the cars hunt through more than 30 left-hand- and over 40 right-hand-bends, plus breathtaking high-low passages. On the long straight at the Döttinger Höhe the topspeed of the most powerful racing cars comes at over 270 kmph. The enormous traffic on the track, the different vehicles, some with less, others with extremely high performance, lead to permanent overtaking maneuvers and lappings. In addition, the conditions of grip, weather and visibility change constantly. This dangerous mix leads to permanent action on the race course which the drivers and teams can master successfully only with highest concentration, correct strategic decisions and reliable technology.

Unquestionably this circuit also claims a lot from tyres which were additionally stressed by unusually high track temperatures during this year's 24h race. But the Pirelli P Zero withstanded this tough mechanical and thermal stress test. There are several spots on the podium for teams supported by Pirelli. In category V5 the team PROsport Performance won with a Porsche Cayman. In the class SP8 T, the two BMW M4 from Team Schirmer occupied the places 2 and 3. And in the class SP9-LG the BMW Z4 GT3 of the PP Group Motorsport took second place and occupied rank 20 in the overall ranking of the 24h race. The new Audi R8 LMS GT4 also made its racing debut. The Audi Sport Team Phoenix brought the two close-to-production sports cars on the third and fifth place in the SP-X class. Thanks to the special performance and reliability of the Pirelli tyres, none of the teams supported by the manufacturer had to give up due to a tyre damage.

But the special flair of the 24h race at the Nurburgring not just results from the fight of the super sports cars on the tarmac. Also the giant barbecue along the race track is unique. For a large part of the more than 200,000 spectators, the boundless party is just as important as the race, many camp for almost a week in the neighboring meadows and forests of the Eifel. Up to 50,000 tents were distributed over 1.5 million square meters of green space. In order to come through the seven days, the fans regularly accomplish enormous logistical achievements. Charcoal, grillables and beverages were carted in huge quantities, antennas are adjust for TV reception, sometimes even whole sitting areas and shanties are built. With this passion it is hardly surprising that the about 60,000 car parking spaces along the Nurburgring are usually very frequented from Monday before the start of the event.

Most of the fans will also be back in 2018. Just like the tyres of Pirelli.