F1, where the streets
are paved with gold

What makes the Monaco Grand Prix, one of the oldest races in the championship, unique? It isn't normally the actual racing… 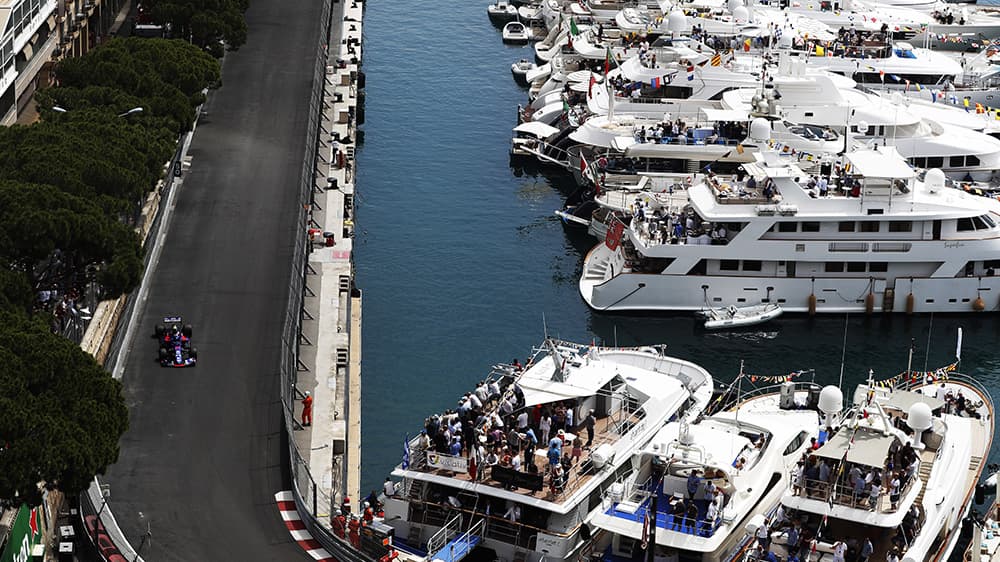 Action and reaction
From the very beginning of time – or since 1929 at least – the Monaco Grand Prix has been synonymous with glitz, glamour, and prestige. What takes place off the track tends to be much more celebrated than what happens on it, which is just as well because – with overtaking practically impossible – the race itself is often a procession.
There are some notable exceptions, of course. In 1955, Alberto Ascari crashed his Lancia into the harbour; a feat that was repeated by Australian driver Paul Hawkins 10 years later (incredibly, Ascari and Hawkins have something else in common; they both died in racing accidents on May 26, separated by 14 years).
Then there was the 1982 Monaco Grand Prix – the race that nobody wanted to win – with five different leaders in the last three laps, following a sudden downpour. And there’s also the Ayrton Senna myth that constantly pervades Monaco, from his out-of-body-experience qualifying lap to his sudden impact with the Portier barrier when leading in 1988, followed by a protracted sulk in his nearby apartment. It’s wrong to describe Monaco as merely a race: it's much more of an event. Both on and off the track.

Harbouring desires
One of the things that makes the place so glamorous is that yacht-filled harbour explored by Ascari and Hawkins, which a few circuits over the years – from Valencia to Abu Dhabi – have tried to emulate, never quite with the same degree of success. Look carefully among the yachts in the harbour and you might see one called “Iceman” – no prizes for guessing who that belongs to. But you don’t have to be a Formula 1 driver to enjoy Monaco on a yacht: luxury packages are available for the weekend for up to around €25,000 per person (including hospitality and bottomless Champagne). As well as supplying tyres for the Formula 1 cars, Pirelli has also muscled in on the glittering yacht scene previously, with Pirelli-branded rubber dinghies ferrying VIP guests across the harbour. They may not be the largest boats in Monaco, but they cut a certain style – and prove that Italian rubber doesn't just belong on land.

Supercars and bicycles
Of course, if you want to stick to road transport, Monaco is one of the best places in the world to spot supercars, especially those with a Formula 1 link. Aston Martin revealed its Valkyrie prototype in Monaco (designed in collaboration with Red Bull by Adrian Newey) a couple of years ago, while the new Mercedes-AMG One also made an appearance in Monaco last year: a hypercar that essentially uses the same type of powertrain as its bigger Formula 1 brother. In fact, there are more supercars concentrated into Monaco’s 2,020 square kilometres than anywhere else in the world: one of the reasons why Pirelli launched its P Zero World boutique – a new style of tyre shop – at Portier last year, not far from where Senna famously clattered into the barriers 31 years ago. Like it or hate it (and many drivers do; three-time champion Nelson Piquet, another Brazilian, famously compared it to “riding a bicycle around your living room”) Monaco is always special. Enjoy the style.

Read more
Related Stories
In Monte Carlo,
every bend has a story
race
The prince
of circuits
race
Stories, myths and
the wheel of fortune
race
MOST READ
Getting the show
on the road