F1 on the streets
of Milan

The Italian Grand Prix at Monza is always one of the absolute highlights of the Formula 1 calendar. The circuit’s illustrious history and unique high speeds are part of the attraction, but it is arguably the passionate home crowds that really make the occasion 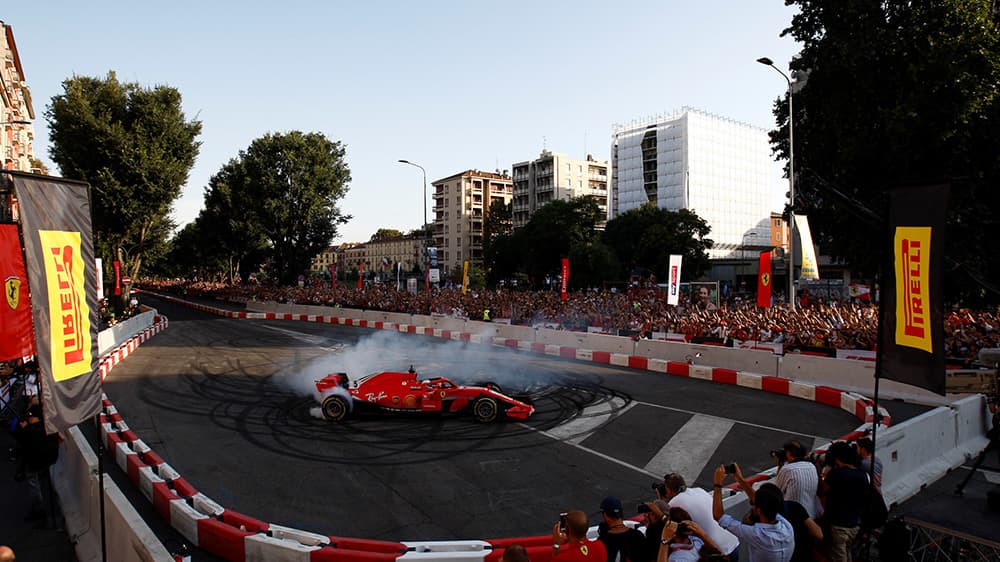 In the run-up to this year’s event, an extra-special treat was laid on for the Italian fans: the Formula 1 Milan Festival. Following on from similar events staged recently in London, Shanghai and Marseille, it brought F1 cars and drivers to the heart of Milan.

While best known as the world’s fashion capital, Milan is also Italy’s business centre – and the home of Pirelli. The close proximity of Monza means that the city always has a degree of F1 fever during the Grand Prix, but this year is a different story, with festivities throughout the week. The main event was on Wednesday however, when a circuit was marked out around the area of Darsena (literally docks in Italian) and the ancient Navigli canals.

Italy’s own Ferrari is always the focus of attention for the tifosi, and both Sebastian Vettel and Kimi Raikkonen were there to please the crowds. They took turns behind the wheel of the SF71H: Ferrari’s 2018 challenger that is proving hard to beat just now, taking Vettel to a championship-boosting win at Spa.

F1’s other Italian-based outfit Toro Rosso also brought its drivers Pierre Gasly and Brendon Hartley. These days it might be Red Bull’s junior team, but it has a long history dating back to the perennial underdog Minardi, and was responsible for one of Monza’s most famous results 10 years ago when Vettel took a record-breaking first F1 win with the team.

The third team taking part was Sauber, which may be run out of neighbouring Switzerland but now has a definite Italian flavour thanks to its partnership with Alfa Romeo: a brand that was founded in Milan 108 years ago. A set of vintage Alfas were used for the driver parade, before Sauber brought the noise, quite literally, with the sound of one of its older V8-engined cars reverberating between the buildings as Charles Leclerc and Marcus Ericsson performed crowd-pleasing donuts.

The event gave the Italian fans a good opportunity to get to know Leclerc, a young driver who could well be a Ferrari hero of the future. He certainly pleased the audience with his fluent Italian, and it seems as though he may have taught his friend Gasly a few words too. The drivers were followed onto the stage by Pirelli’s head of car racing Mario Isola, who spoke to his fellow Milanese about his passion for F1.

It was a fitting start to the Italian Grand Prix schedule, and you get the feeling that a long-awaited Ferrari victory this weekend at Monza – where Mercedes has used its power advantage to dominate over recent seasons – could be one of the most popular ever among the tifosi.

Read more
Related Stories
The Italian Grand Prix - Discovering the Brianza area
race
Silverstone: a king that won't abdicate
race
Cows, castles and engines
race
MOST READ
Getting the show
on the road