Right in the heartland of Italy, Imola reflects the passion of a region that lives and breathes motorsport. Enzo Ferrari wanted the track to happen. And in 1994, Ayrton Senna lost his life there 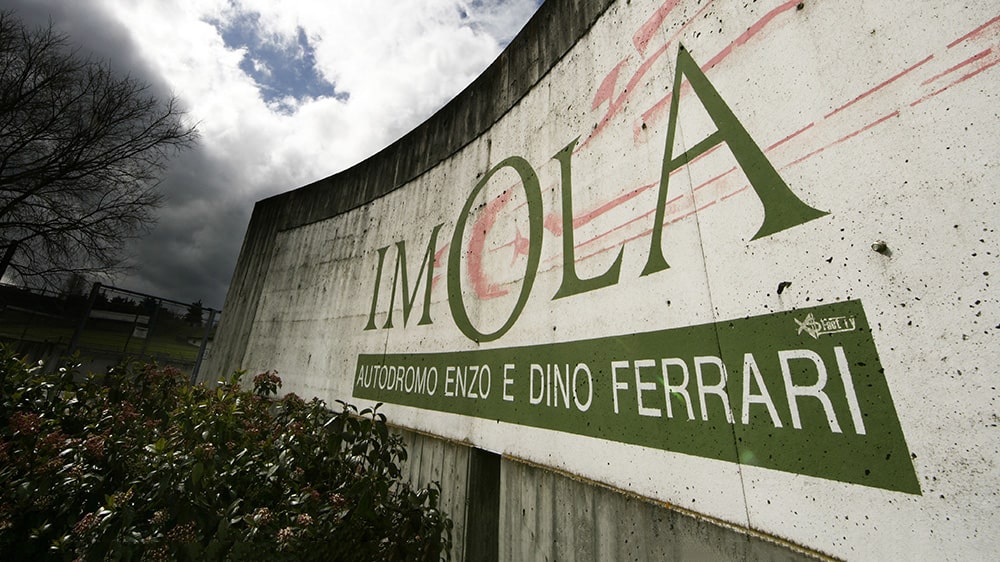 There are few places in the world that revolve around motorsport as passionately as the province of Emilia-Romagna, in the heart of Italy. It’s a region that is split in two: Emilia is more focussed on cars – it's no co-incidence that manufacturers such as Ferrari, Maserati, Dallara, Bugatti, and Lamborghini are all based there – whereas the Romagna area close to Bologna is all about bikes, like Ducati. Imola sits right between the two, and it combines the best of both worlds. This region is all about tradition, culture, and cuisine. What goes on at the circuit reflects all those passions.

Imola’s history as a racing venue began just as soon as the Second World War finished. In 1947, the initial idea was for a 3.8-kilometre track outside the town using open roads: starting with a long uphill straight that bore left (the famous Tamburello corner) and followed the Santerno river, before another uphill left-hander (Tosa) and then a dash further up into the hills, where a series of corners reflected the natural topography of the landscape,  all the way down to the double Rivazza corner. From there, the circuit continued back to the pit straight, and then on towards Tamburello once more.

These types of circuit, which track the contours of the local scenery, rather than being designed from scratch by an architect in a studio, are the ones that tend to be among the greats. These were the places that got hearts racing because they truly tested the abilities and courage of the drivers. Imola was originally intended for motorbike races only, but in 1948, local businessman Tommaso Maffei Alberti formed the company that got the circuit properly off the ground. He then asked for the support of Enzo Ferrari, who was already an international automotive icon back then.

The Commendatore agreed to leave Maranello (an unusual fact in itself) and came to visit the new circuit. He liked it, even calling it “a little Nurburgring”. That was a resounding compliment from a man who had already written his place firmly in motorsport history. Ferrari helped put together a group of investors to take the project further, and the Automobile Club d’Italia – Italian motorsport’s governing body – finally approved the project to build a permanent track; still using roads open to the public.

The first race was in 1953, called the Gran Premio Città di Imola. It was valid for the Italian motorbike championship, attracting more than 60,000 spectators. One year later, there was the first international race: the Conchiglia d’Oro Shell, won by Umberto Maglioli in his Ferrari 500 Mondial, ahead of the Maserati of Luigi Musso. In April 1963, Imola made its (non-championship) Formula 1 debut, with Jim Clark winning in a Lotus 25.

Things then moved on quickly. In the mid 1960s the track was finally closed to traffic, becoming a racing circuit only, and in 1970 it was named after Dino Ferrari: the son of the Commendatore who had succumbed to illness in 1956.

A couple of years later the circuit was looking quite close to what we see today, with the Variante Bassa built to slow cars down on the long straight from Rivazza towards the start-finish. Variante Alta was built at the same time, to slow down the long uphill run after Acque Minerali. This configuration hosted Formula 1 for the first time in September 1979 for the Dino Ferrari Grand Prix: a non-championship race desired by Enzo Ferrari, and won by the Brabham-Alfa of Niki Lauda. The Austrian is still the most famous Ferrari driver of them all, who was even buried in his red overalls after he passed away in May 2019.

Senna and Ratzenberger lose their lives

In September 1980, Imola finally got to host the Italian Grand Prix, which had always been held at Monza up to then. Imola kept its place the next year as the San Marino Grand Prix, which allowed for two races to be run each year in Italy. Some of those races went down in history, for all sorts of different reasons. Especially that fateful May 1 in 1994, when Williams driver Ayrton Senna died in an accident at Tamburello. Only the day before, Roland Ratzenberger had also been killed: making it still the most tragic weekend in Formula 1 history.

Since Enzo Ferrari died on August 14, 1988, the track has been known as the “Autodromo Dino and Enzo Ferrari”: a name that lives on today. The track continued to host Formula 1 until 2006 on a layout that was about five kilometres long and where in 2004 Jenson Button set the pole position record in a BAR-Honda at an average speed of 222.6kph. The outright lap record is still held by Michael Schumacher.

When Imola returns to the calendar this year, it will do so with yet another slightly modified layout to the anti-clockwise track. The old Variante Bassa before the pit straight is gone, and the long straight towards Tamburello is now broken up by two right-hand corners. The Variante Alta has some added safety features with more run-off and there are brand new pit garages: only the old Marlboro tower remains from the previous start-finish complex.

These are the constant reminders of the past, but the present will have a somewhat different look to it. Not just because the cars and the circuit aren’t exactly the same – but also because the weather is set to be quite diverse too. The traditional Imola slot was always in springtime: October will present a fascinating alternative context.

Read more
Related Stories
Formula 1 returns to Portugal: history and past events
race
Lord of the Ring
race
F1 arrives in Russia: the future of sports
race
MOST READ
The Pirelli P Zero trofeo r: to the clouds with the Urus