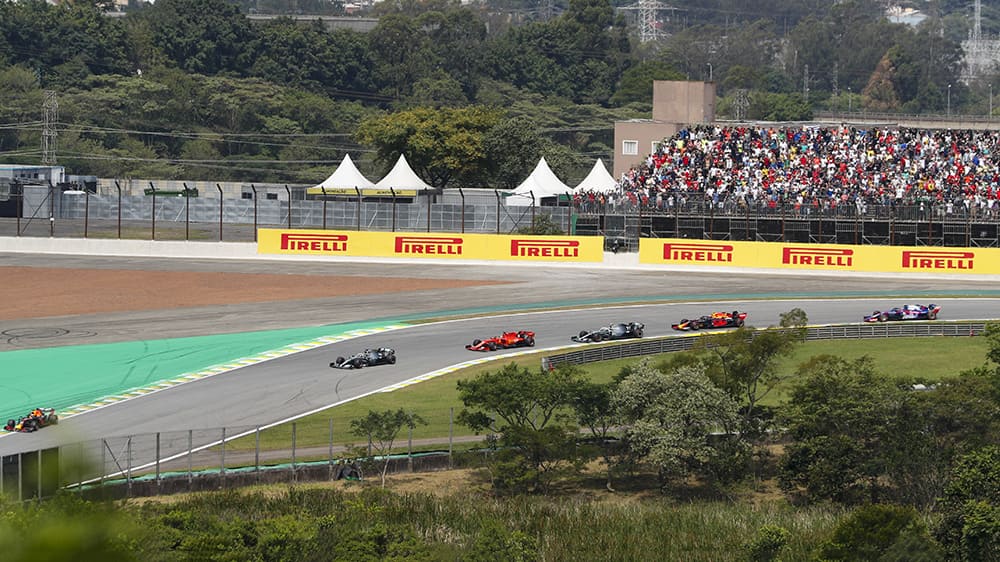 Drivers from Brazil have claimed eight Formula 1 world titles: only Britain and Germany have more. The country’s first champion was Emerson Fittipaldi, who achieved the first of his two titles in 1972. Just a few months later, in February 1973, the Formula 1 world championship came to Fittipaldi’s home city of Sao Paulo for the first time. Fittipaldi won the race at the Interlagos circuit for Lotus, and he would do the same one year later – this time for McLaren – on his way to winning his second drivers’ crown.

The Fittipaldi family continues to be prominent in motorsport today: one of Emerson’s grandsons Pietro started two Formula 1 races for Haas at the end of 2020, while another, Enzo, is currently racing in Formula 2. He also has a younger son – Emerson Jr – competing in Formula 4.

It was another Paulista – a native of Sao Paulo – who completed a hat-trick of home wins in the third Brazilian GP in 1975: Carlos Pace. His victory for Brabham was the only one of his F1 career, which was sadly halted by a light aircraft accident two years later that claimed his life. But his memory lives on today at the Interlagos circuit, which is officially named the Autodromo Jose Carlos Pace.

Learning from the Professor

For 1978 the Brazilian GP switched to a newly-constructed circuit in the Jacarepagua neighbourhood of Rio de Janeiro, the capital city – and also the home city of Brazil’s next champion, Nelson Piquet. It hosted the race uninterrupted from 1981 to 1989, during which time Piquet claimed his three world titles, and the circuit would later be renamed in his honour.

Piquet actually claimed pole position for the 1981 event, only to have a torrid race in wet conditions, but finished the year with his first championship. His 1983 title-winning campaign, on the other hand, did start with a home victory. Piquet also won the 1986 race but lost out in that year’s title fight to Alain Prost: In 1987 the tables were turned, with Prost starting the season with victory in Piquet’s backyard but the Brazilian ending up as champion.

To the frustration of the local crowds, it was Prost and not Piquet who proved the master of the Rio circuit. The Frenchman claimed five wins there in the space of seven seasons, and has six Brazilian GP wins in total, more than any other driver. His last triumph came in 1990 when the race moved back to Interlagos after the success of another son of Sao Paulo – Ayrton Senna – had prompted work to revamp and shorten the circuit there. After years of trying, Senna finally won his home race for the first time in 1991 – despite becoming stuck in sixth gear – and again in 1993.

Where champions are made

Traditionally, F1 went to Brazil during the early part of the season, but in 2004 the race was moved to become the final race. Since then, the winner of the drivers’ championship has been decided six times at Interlagos, often in thrilling final-race deciders. Fernando Alonso clinched his first crown in Brazil in 2005 with two races still remaining; then a year later sealed a successful defence against Michael Schumacher in the last race.

Lewis Hamilton was central to two of the most memorable Interlagos deciders in 2007 and 2008. On both occasions he arrived leading the championship, but in 2007 his McLaren suffered a gearbox problem and he lost the championship by a point to Kimi Raikkonen, who won the race for Ferrari. Then, in 2008, he defeated the latest local hero Felipe Massa after famously overtaking Timo Glock for fifth place at the very end of the race.

Jenson Button also clinched the title in Brazil in 2009, as did Sebastian Vettel in 2012 in another final-race thriller against Alonso. In more recent seasons, Hamilton has arrived in Brazil already guaranteed the championship. But 2021 is a very different story, with four races still to go and Hamilton fighting tooth-and-nail with Max Verstappen to defend his crown.