The date: Thursday 24 November. The place: Abu Dhabi, or more specifically the Yas Marina paddock. We’re going to host an event halfway between a media launch and a drinks reception, as a way of saying goodbye to this season as the sun sets, and saying hello to the exciting future that is just around the corner. One of the key players in that future will be Pirelli, with its new range of 2017 tyres. The five slick tyres as well as the intermediate and wet tyres, revealing their new tread patterns for the first time, will be on display at our sundowner party. So as well as a spectacular red sunset over Yas Marina, there will also be a rainbow of colours that form Pirelli’s latest Formula 1® range.

After just three more days of free practice, qualifying and the race this weekend, Formula 1® will enter a new era. To be precise, a new wider era: especially when it comes to tyres. That may sound too tyre-centric but given that the most obvious sign of the 2017 technical revolution in Formula 1® will be wider tyres, there is plenty to talk about. The width increases by 25% both on the front and rear wheels. Pirelli has been testing these new tyres since the beginning of August with a test programme split over five circuits on two continents, and with three teams using specially made mule cars: Mercedes, Red Bull and Ferrari. The final day of testing as part of this development programme will be on Tuesday 29 November in Abu Dhabi, two days after the last grand prix of the year. This will be the first time that the three teams will be seen on track together with their mule cars, after the previous 21 days of testing that have been carried out individually in three countries, using the Fiorano, Mugello, Barcelona,  Paul Ricard and Abu Dhabi circuits (in strict chronological order). 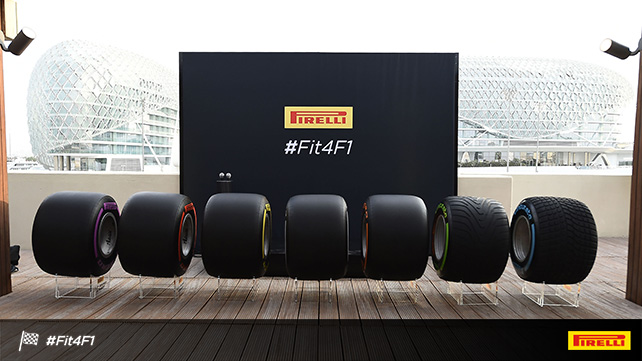 Why exactly are we going to have wider ties? The reason is simple. Even during this season, which is the third one of the hybrid era, the cars have been on average around two seconds per lap quicker compared to 2015. Now the next step comes, because the new generation of Formula 1® cars will be another three seconds faster still. In order to achieve this objective, aerodynamic downforce will increase. As a result the cars will be cornering quicker. And in order to guarantee sufficient grip through the corners at these increased speeds, wide tyres are needed. It’s fair to say that it’s a big increase too: the front tyre goes from 245 to 305 millimetres wide, meaning that it becomes nearly as wide as the current rear. In turn, the rear grows from 325 millimetres to 405 millimetres. The overall diameter of the tyre remains largely unchanged, going from 660 millimetres to 670 millimetres, which is the current diameter of the treaded rain tyres. The wheel size remains at 13 inches, which is now part of long-standing F1® tradition.

This important 25% increase – at front and back – will also improve the contact patch of the tyre, which is optimised for maximum adhesion. This is where the greater grip will come from and therefore the capability to put the power onto the ground to help the cars corner faster, as well as improve acceleration and braking. This will be Pirelli’s contribution to enhancing not only next year’s show but also the two years after that, as the Italian firm and Formula 1® will be linked at least until the end of 2019.  Will this revolution be enough to give grand prix racing the even greater spectacle that everyone wants? Without a doubt the increase in horsepower will contribute to that as well. The cars are running close to and sometimes above 800 horsepower currently, and even the 900 horsepower threshold isn’t far away. This will enable cars to counteract the loss of speed caused by increased downforce (and therefore more drag, especially at the front of the car) with faster cornering speeds, thanks to wider tyres. And with these premises and promises the 2017 Formula 1® season is ready to take flight. Starting with an aperitivo courtesy of Pirelli, on Thursday 24 November in Abu Dhabi.