The 1000 races celebration in Shanghai continued even on the final podium, thanks to some unique headgear from Pirelli 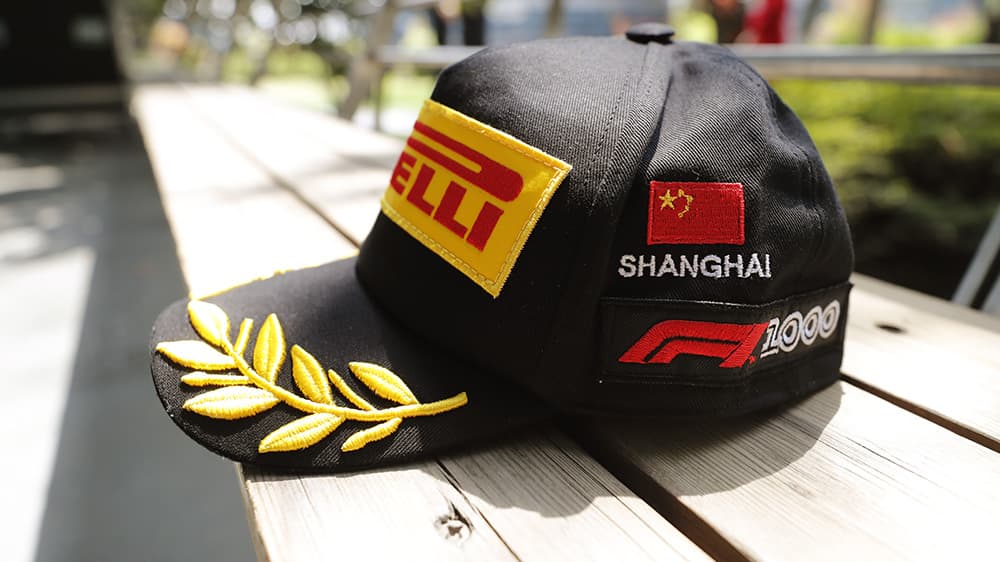 Keeping a lid on everything
If you want to get ahead…get a hat. These days, everyone wants their stuff personalised and podium caps in Formula 1 are no exception. At the Chinese Grand Prix, Pirelli produced a special podium cap to celebrate 1000 races – just one element of the weekend-long party to mark this incredible Formula 1 milestone.
Some drivers also used special helmets during the race weekend: putting the emphasis firmly on headgear. Daniel Ricciardo went for a plain white helmet with a big number 3, in tribute to his Aussie hero Jack Brabham. Kimi Raikkonen said that he wanted to go even more old school and use an open face helmet, but that he might run into trouble with the regulations…

It started with a Stetson
This year’s Chinese Grand Prix wasn’t the first time that Pirelli commissioned some special podium caps. The first one was for the 2012 United States Grand Prix where the winner – Lewis Hamilton – was crowned with a special edition cowboy hat. It’s still a favourite among his hat collection now. Five years later, Lewis earned another special-edition United States winner’s cap: this one coloured bright pink, to underline the race’s promotion of breast cancer awareness. The 2015 season was another vintage one for dedicated Pirelli podium hats: Nico Rosberg gained a Pirelli sombrero after winning in Mexico, while Hamilton sweated underneath a Russian ushanka in Sochi. That would be a traditional fur hat with ear flaps – just what you need after a long and hot grand prix.

Special edition
All the Pirelli hats – including the latest one for China – have been special one-offs, unique to the races for which they were created. And while there are no immediate plans to produce any more special caps, you never know where this idea might go in future. Caps with dangling corks for Australia possibly, or maybe a bowler Pirelli cap for Silverstone? Not to mention a beret for the French Grand Prix, or maybe even a douli hat for the 2020 Chinese Grand Prix: essentially a flat cone made from bamboo, traditionally worn to protect workers from the elements in rice fields. This type of hat is common in Vietnam too, where it’s known as a non la hat. Now there’s an idea for next year…