MONTICHIARI: WHERE IT ALL STARTED

The Italian Grand Prix and Monza are almost inseparable: in only one season of the Formula 1 world championship since 1950 has the race not been run at Monza, when Imola hosted the 1980 edition. But the Italian Grand Prix story begins just over 100 kilometres away from Monza in the town of Montichiari near Brescia, where the first edition in 1921 was held over a 17.3-kilometre course, won by Frenchman Jules Goux driving a 3.0-litre Ballot on Pirelli tyres.

At the beginning of the following year, the decision was taken to construct a permanent circuit at Monza, influenced by the desire of the Italian car constructors to have somewhere to test their creations. This goes some way to explain the original layout, which included a high-speed oval loop as well as the typical road course that continues to be used today – together providing a thorough test of speed, handling and reliability. A workforce of 3500 built the track in just 110 days, and on September 10 it hosted the second Italian Grand Prix.

Sadly, tragedy struck at Monza during the 1928 Italian Grand Prix when Emilio Materassi collided with another driver coming onto the pit straight and his car left the circuit. He lost his life together with 27 spectators. As a result, the Italian Grand Prix was not run again until 1931, when Giuseppe Campari and Tazio Nuvolari won a 10-hour race covering over 1500 kilometres. Safety concerns continued, however, and Campari was one of three drivers killed during the 1933 event. This led to a number of alternative layouts being used in subsequent years, with chicanes included to reduce speeds. In 1937 the race was held on the Montenero circuit around Livorno on the Tuscan coast. 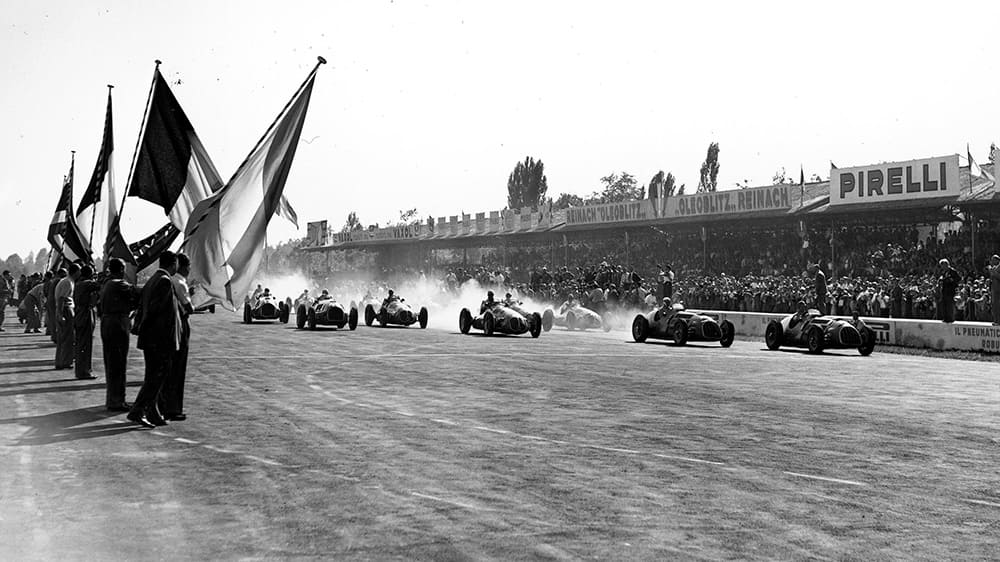 FROM TURIN TO MILAN

After the interruption to racing caused by World War Two, the cities of Milan and Turin hosted the 1947 and 1948 races respectively before renovations planned for Monza some 10 years earlier could finally be put into use from 1949 – when Alberto Ascari claimed his and Ferrari’s first Italian Grand Prix win (one year before the official Formula 1 World Championship was inaugurated, in 1950). The high-speed oval had now been removed but would be rebuilt just a few years later and used for the 1955 and 1956 races.

It was dropped once again for 1957 because the Ferrari and Maserati cars hit problems on the rough surface; then reintroduced for 1960 to raise speeds and therefore favour the powerful Ferraris against their British rivals – who then boycotted the race on safety grounds. After the death of Wolfgang von Trips and 11 spectators in 1961, the Monza oval would never be used again in the Italian Grand Prix, although it still stands today.

Notable races from the 1960s include the 1966 victory for Ferrari’s Ludovico Scarfiotti: no Italian driver has won their home race since. The following years played host to some of the closest finishes in Formula 1 history. In 1967, John Surtees beat Jack Brabham by two tenths of a second. Two years later, the same margin covered the top four as Jackie Stewart pipped Jochen Rindt, Jean-Pierre Beltoise and Bruce McLaren to the win. Rindt sadly lost his life at Monza one year later, and became Formula 1’s only posthumous world champion. In 1971, Peter Gethin beat Ronnie Peterson by one hundredth of a second in a five-way fight to the line.

Chicanes were added to Monza in 1972 at the end of the pit straight and at what became known as Ascari, and the third Roggia chicane followed four years later, creating the layout that is still used today – with some minor tweaks. A further upgrade to facilities at the end of the decade meant that the 1980 race took place at Imola; it has been run at Monza every year since.

In that time, Monza has played host to many memorable Italian Grands Prix, such as in 1988 when Gerhard Berger and Michele Alboreto scored a one-two for Ferrari in a season totally dominated up to that point by McLaren. An especially emotional result for the tifosi, coming a month after Enzo Ferrari had died.

Naturally, Ferrari has been involved in many of those great moments. In 1996 Michael Schumacher took the first of a record five Italian Grand Prix wins, all of them with the Prancing Horse. That record has since been equalled by Lewis Hamilton, who was thwarted in his efforts to go one better in 2019 by the defence of Ferrari’s Charles Leclerc.

In recent times another far less famous Italian team has also tasted great success at its home race. The former underdog Minardi outfit based at Faenza claimed its maiden win as Toro Rosso at Monza in 2008 thanks to a peerless performance from Sebastian Vettel in the wet. Twelve years later it repeated the feat as AlphaTauri with Pierre Gasly – a result nobody saw coming. What’s in store for 2021: a century after the Italian Grand Prix first burst onto the international motorsport scene?

Four ideas that - pending the introduction...