Drivers and cars
with stories to tell

The most amazing cars and the very best stories. The 2017 Blancpain GT Series got underway with the media and test days at Paul Ricard in France 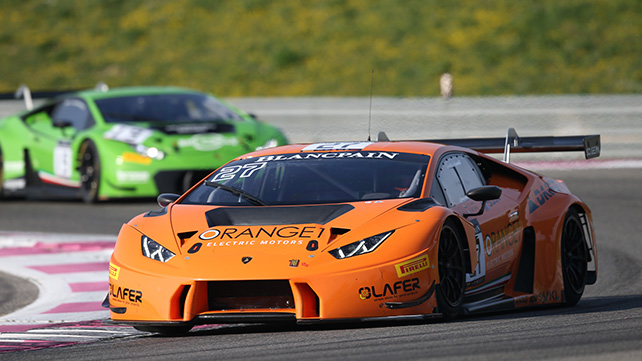 Playing the numbers game
The sheer numbers are almost as impressive as the length of the famous Mistral Straight.
At Paul Ricard there were 50 cars, representing 11 manufacturers, and nearly 200 drivers at the Blancpain GT Series media and test days. Pirelli brought around 2500 of the latest-generation P Zero GT tyres, which have evolved to suit a wider variety of GT cars than ever before. That’s a direct response to the increasing popularity of racing cars that closely resemble supercars seen on the road: in other words, cars that people can relate and aspire to. Since 2006, around 1400 GT3 cars have been built: that’s around 130 brand new cars every year, from the world’s top manufacturers. These race in approximately 20 different GT championships and stand-alone events all over the world: chief of which is the Blancpain GT Series, taking in both endurance and sprint races. The Paul Ricard media and test days were also an opportunity to announce the entry list for 2017. More than 30 pro cars will take part, with the races also open to amateur drivers: in the great tradition of GT racing, which connects ordinary people to professional drivers.

Once upon a time…
The cars are truly magnificent, as you would expect from bespoke racing machines carefully crafted by the world’s most prestigious manufacturers; most of whom use Pirelli as original equipment on their road cars as well. But as always, it’s the drivers who are the real stars. All of those who turned up at Paul Ricard had their own compelling stories to tell.
Take Lucas Ordonez, for example. He started off life as a dedicated video gamer, but thanks to Nissan’s GT Academy programme, which based a talent search for a real racing driver on a video game competition, the Spaniard finally got to realise his dream of becoming a professional racer.
Or Marco Mapelli. The Lamborghini driver was relatively unknown to the wider world until a few weeks ago, when he set the fastest ever time for a production car around the legendary Nurburgring Nordschleife: 6m52.1s. This blistering lap time was set with a Lamborghini Huracan Performante, again using specially-developed Pirelli P Zero tyres.
Or BMW factory driver Antonio Felix da Costa. The young Portuguese was taken on by Red Bull and has driven in several Formula 1® tests, although he says that one of his greatest moments was deciding to do the Macau Formula 3 Grand Prix last year at the last minute: the first time that Pirelli supplied the event. After several years away from this classic race, he won it against the odds.
Or Dean Stoneman, who bravely recovered from testicular cancer to win again at the highest levels of racing, and has now been recruited as a McLaren factory driver.
Plus there are the established big names of course, such as Giancarlo Fisichella with Ferrari and the all-British line-up of ‘Bentley Boys’ in the Continental.
The Blancpain GT Series is a fascinating place to wander round the paddock and meet all those drivers with their amazing stories. Unlike many other championships, you really can meet them too. Fans are welcome to come into the paddock, and the drivers always have time for them.

More ‘connected’ than ever before
The Paul Ricard circuit, with more than 100 different potential configurations, is the ideal place to come testing, with the teams trying out the latest evolutions on their cars, as well as some new drivers and the latest Pirelli DHD tyres. These now feature a new size at the front, which is designed to make the front and rear of the car feel more ‘connected’, improving the handling and balance. As a result, the cars are going quicker than ever. The fastest laps at Paul Ricard, using the full grand prix circuit, were in the region of 1m56s. The last French Grand Prix at Paul Ricard, in 1990 featured a fastest race lap of 1m08s thanks to Nigel Mansell and Ferrari, but that was on a short circuit: the last time the full circuit was used for F1® was 1985, where the fastest lap was 1m39s courtesy of Keke Rosberg. It’s going to be interesting to see how this all compares to the re-born French Grand Prix scheduled for July 2018 at Paul Ricard. The F1® cars are going to use the chicane halfway down the straight next year: the Blancpain cars testing this week didn’t – making them around 15 seconds or so off 1985 Formula 1® pace, comparing like for like.
Of course, you don’t have to wait until next year to see some racing action in Paul Ricard, as the Blancpain GT Series is back there for the six-hour race between June 23-25. The season gets underway on April 1-2 at Misano in Italy, with the highlight as usual being the Spa 24 Hours in Belgium from 27-30 July: Pirelli’s biggest event of the year. We’ll see you there.