Many people at Pirelli don’t just work in motorsport, but also participate. Read on to find out 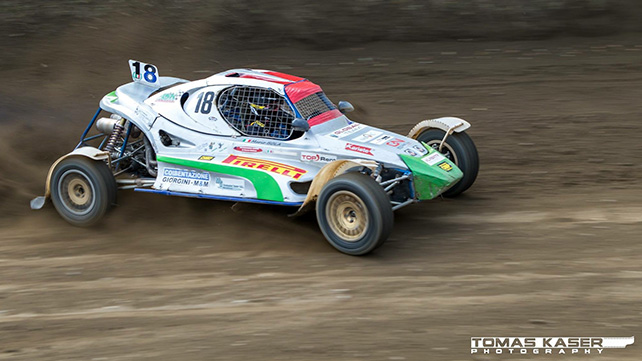 Czech it out
Pirelli’s racing manager Mario Isola has a full schedule of races and events throughout the year, so what does he do on his weekend off? Relax and watch television at home? No. Attend some sort of spiritual retreat high in the mountains, a long way from the roar of engines?
Not that either.
Instead, he goes motor racing. Mario started his Pirelli career as a test driver and he’s also competed on a number of rallies in the past: one of a number of Pirelli people who participate in motorsport as well as working on it. But recently he tried something completely different: autocross.

What’s autocross?
It might just be the most popular championship that you have never really heard of. The top class is called Super Buggy: a specially-built spaceframe four-wheel drive buggy. The experience is not dissimilar to driving a Group B rally car – only in the open air.
The cars compete in small groups over a series of heats, a bit like rallycross, with the winner decided in the final. The sport is particularly popular in Eastern Europe, which is how Mario found himself heading over to Humpolec in the Czech Republic, southeast of Prague.
He also had a well-known team mate: former GP2 champion Davide Valsecchi, who won his title in 2012 with Pirelli and now competes on the Blancpain GT Series. When Davide isn’t driving, he commentates on both F1 and GP2 for Sky. So it’s equally surprising that he too chooses to spend his precious weekends off in pursuit of new four-wheeled adventures.
Nonetheless, ‘Team Pirelli’ – as one look at their specially tailored OMP race suits confirmed – was looking forward to a strong weekend. Only problem was, Mario had never driven a buggy of this type before. And owing to various travel complications in getting there (Humpolec isn’t yet served by its own international airport) the first taste he had of the Super Buggy was in qualifying.
Autocross takes place over a short and twisty gravel course. There are several hundred horsepower under your right foot and an open-face motocross-style  helmet with goggles. So it’s one of the most intense experiences you can have in motorsport. Mario emerged from the experience wide-eyed. That’s if you had been able to see his eyes under the layer of mud on his goggles…
“It was incredible: just pure adrenaline,” he said. “Nothing ever stays still: you’re moving all the time: steering, counter-steering, acceleration, braking: the driving experience is incredibly busy. And the sheer performance is phenomenal.”

Podiums and plaudits
Despite the difficulties in getting to grips with these brutal dirt racers (not completely dissimilar to the sort of competition that another famous Mario, Mario Andretti, started his illustrious career with in the 1950s) ‘our’ Mario finished third in his first session.
He also managed to finish third in his second race but then couldn’t go any further in the final because of a broken gearbox. Nonetheless, both he and Valsecchi were absolutely delighted with their weekend.
“Most of all, I’d like to thank my very good friend Giovanni Trincossi and everyone else at Team Praga that ran our buggies,” concluded Mario. “They are a fantastic, really dedicated group of people. And of course, Pirelli, who supplied our tyres! I couldn’t recommend autocross enough: it’s something that everyone should try because it’s a really fun mix of rallying and racing.”
There you have it: living proof that at Pirelli, we really can’t get enough of it.