British GT: the race, the cars, the tracks and more

Some trivia about this special, popular championship held for GT3 and GT4 car series in Great Britain 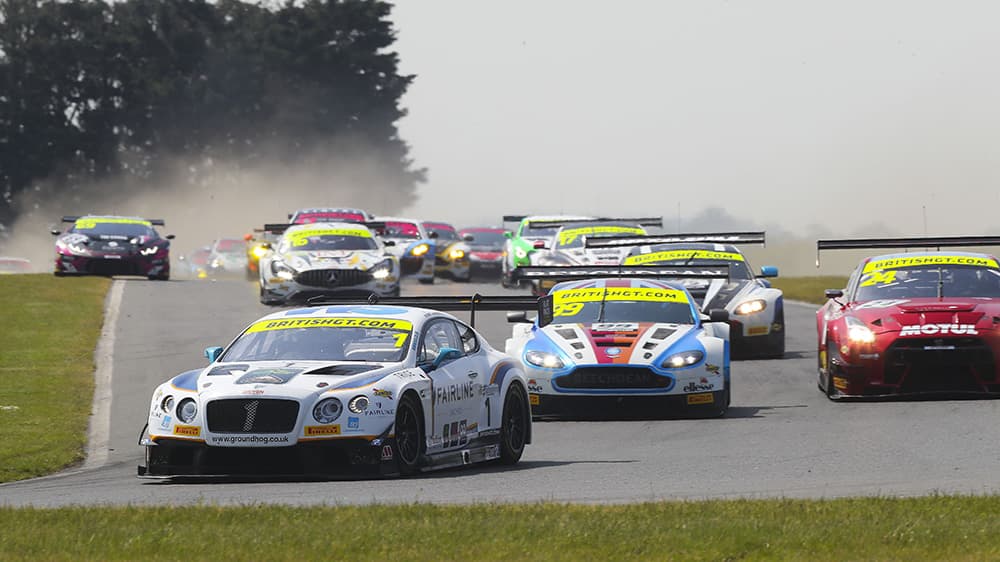 WHAT IS THE BRITISH GT?
The British GT is a sports car racing series based in the United Kingdom, although some races take place outside the country.

The traditional series was once known as the BRDC GT Championship and the Avon Tyres British GT Championship; it was originally created by the British Racing Driver’s Club in 1993 and for its first two season was known as the National Sports GT Challenge. The series is currently run and organised by the Stéphane Ratel Organisation (SRO) and since 2016 Pirelli is serving as the championship’s official sole tyre supplier.

The SRO is a motorsport organisation founded by French driver Stéphane Ratel in 1995. It is now based in London and it is involved in the organisation of multiple national and international auto racing series, all the while being backed by the Fédération Internationale de l'Automobile (FIA) in providing regulations.

WHAT TYPES OF CARS TAKE PART IN THE COMPETITION?
The cars taking part in the race are all performance luxury automobiles, classified as grand tourer (the translation of the Italian term “gran turismo” and abbreviated as “GT”); the cars are capable of high speed and long-distance driving.

The GT cars are divided depending on their power into GT1, GT2 and GT3 and GT4. Two classes of cars currently compete in the British GT, that is, GT3 and GT4.

A real GT racing revolution took place, with Britain GT at its forefront establishing itself as the world’s foremost domestic GT series. With the arrival of GT4 in the competition and subsequent expansion, the British GT currently sees two classes of cars running on the same track at once, thus enabling drivers to prepare for international endurance racing.

- GT3 series
The GT3 Group, technically known as Cup Grand Touring Cars, was initially created by the SRO Group in 2005 to define a third standard of power in grand touring motorsport, when a the FIA GT3 European Championship was established thus marking GT3 as de facto a category in its own right for many national and international grand touring series.
By 2013, nearly 20 automobile manufacturers have launched or have been represented with GT3 machines.
Group GT3 is the standard name of a class including wide variety of card types to be homologated with barely any limit on engine size and configuration, chassis construction or layout. GT3 cars are regulated either by the GT Bureau of the FIA or by a set of specific ruling bodies which measure up to Balance of Performance formulae factors such as horsepower, weight, engine management and aerodynamics in order to prevent a single manufacturer to become a dominant in the class. For qualifying technical requirements, GT3 cars are set to have a total weight varying between 1200 to 1300 kilograms with horsepower between 500 hp and 600 hp.
GT3 was envisioned as a category to combine several existing cars from one-make series, such as the Porsche Supercup or Ferrari Challenge, as well as other race cars available from manufacturers that did not fit in the GT1 or GT2 standards, thus allowing them to compete anyway with their performance being strictly controlled by the FIA.

- The GT4 series
The GT4 European Series, formerly known also as GT4 European Cup, is a sports car championship which was similarly created by the SRO. It is an amateur championship which followed a formula analogous to the GT3 European Championship. In spite of being the least powerful of the four classes, GT4 is equalised to the other classes, thus allowing driving skills to become a key factor in determining a race’s performance and outcome.
GT4 class cars mostly include those cars that are considered track days cars, that is, factory-built race cars which are made available to the public. Nonetheless, custom-built cars based on production models may also be built by teams. All cars are first test driven by FIA and then modified so that they all have near identical performance levels.
Once FIA has approved the car, it cannot be further modified by the teams, thus eliminating constant development costs for constructors. To increase the performance equaliser factor, all cars run on regulated Pirelli and Continental tyres.

WHO ARE THE DRIVERS?
As for the competitions, just in same way as for GT3, GT4 drivers have a set of criteria they have to abide by and which would automatically eliminate them from the competition based on their level of experience. GT4 class drivers are meant to be amateur, thus the criteria for their participation in the competitions are even tighter than for GT3 drivers.

The drivers who take part into the GT4 races, the British GT being one of them, are the so-called “Silver drivers”, that is, drivers under the age of thirty, who have not had a top-ten finish in any national let alone international single-seater championship. The so-called category of “Bronze drivers” can take part to the races too; these are drivers who have obtained their first licence after being thirty years of age, or also any driver under 30 with a licence issued for the first time during the year of their first categorisation. Bronze drivers can also be former Silver drivers who have never obtained significant results.

In GT4 race competitions, if at least five cars of the same make participate, also a manufacturer cup would be awarded, similar to the style used in GT3.

WHICH MAKES AND CARS COMPETE IN THE BRITISH GT?
Amongst the makes and cars taking part to the championship we can count:
- Aston Martin with Aston Martin Vantage GT3
- Bentley with Bentley Continental GT3
- BMW with BMW M4 GT4
- Ginetta with Ginetta G55 GT4
- Jaguar with Jaguar FT-TYPE SVR GT4
- Lamborghini with Lamborghini Huracan GT3
- McLaren with McLaren 570S GT4 and McLaren 650S GT3
- Mercedes with Mercedes-AMG GT3 and Mercedes-AMG GT4
- Nissan with Nissan 370Z GT4 and Nissan GT-R NISMO GT3
- Toyota with Toyota GT86
- Ferrari with Ferrari 488 GT3 (although not competing in the 2018 season)

THE CURRENT RACES OF THE COMPETITION
Currently the British GT takes place on seven different tracks: Oulton Park, Rockingham, Silverstone, Snetterton, SPA-Francorchamps, Brands Hatch and Donington Park; on most of these tracks takes place an epic two-hour race on either one or two different days. In races lasting only one hour the top three finishers in each class from the previous round must respectively serve an additional success penalty during their mandatory pit-stop. Competitors must make at least one pit-stop during all British GT races.

Of the above-mentioned circuits, Silverstone is one of the only two venues to have hosted a British GT round in every one of its seasons since its launching season in 1993 up to now. This has granted the circuit the status as the series’ most prestigious event of the whole season and it is the only event on the calendar to feature a three-hour race.

Moreover, Silverstone is the current host of the British Rallycross Championship and of the British Grand Prix, which was first hosted here in 1948.  On this circuit the FIA World Endurance Championship (also abbreviated FIA WEC) also takes place; it is a race organised by the Automobile Club de l’Ouest and which superseded the former Intercontinental Le Mans Cup and the World Sportscar Championship.

Pirelli has confirmed the tyre testing for F1 Grand Prix will take place in circuits like Silverstone and Circuit Paul Ricard in France, where the competition will also take place.

Brands Hatch used to host British F1 races, the Formula One motor racing series held in the United Kingdom up until 1982. It also hosts the Mini Challenge and the British Touring Car Championship, a touring car racing established in 1958 by the British Saloon Car Championship.

THE AWARDS
There are several awards and trophies to win in the British GT:

- Blancpain Driver of the Weekend
The trophy is awarded to the most impressive GT3 amateur performance;

- Sunoco Fastest Race Lap of the Weekend Award
It is awarded to both the GT3 and GT4 driver who set their class’ fastest race lap. When the race takes place during a weekend, the price would still go to the overall fast finisher of each class. The champion with fastest laps throughout the seasons will be then crowned at the prize giving ceremony occurring at the end of the season.

- Professional Motorsport World Expo Team of the Weekend Award
This award will go to the outfit that has gone above and beyond or produced a stand-out act during each British GT events, may that be overcoming a particularly difficult technical issue or challenge, executing an innovative race strategy to perfection or achieving an unexpected result when facing adversity.

Every year hundreds of spectators buy tickets to witness the battle amongst the champions happening on the speedway of the race course. Every year the exhibitions of the cars taking part into the race offer a gripping show from grid to paddock and then to the finish line, proving it is definitely a show as captivating as the one offered by their bigger sisters of the classes GT1 and GT2.