From McLaren’s new GT4 to Bentley’s returning Continental GT3, British racing’s finest will be in attendance

GT racing is home to competition breeds of some of the most desirable road-going sportscars around, with spectacular machinery engaged in action-packed motorsport. Ranking among the most popular series globally for such competition is the British GT Championship.

The British GT season takes place over seven race weekends, taking in both famous circuits such as Silverstone and Brands Hatch as well as lesser-known gems like Oulton Park. There’s also a trip overseas to the world-renowned Spa-Francorchamps in Belgium.

Race formats vary between single endurance races of two or three hours and double-header sprint races lasting one hour each. This provides variety to the watching fans and tests the versatility of the competitors.

The field of cars is split into two different classes: GT3 and GT4. While still closely related to their road-going cousins, the GT3 cars are allowed more modifications to elements such as bodywork, engine and suspension than the GT4 cars. In both classes, car performance levels are equalised to encourage competition. 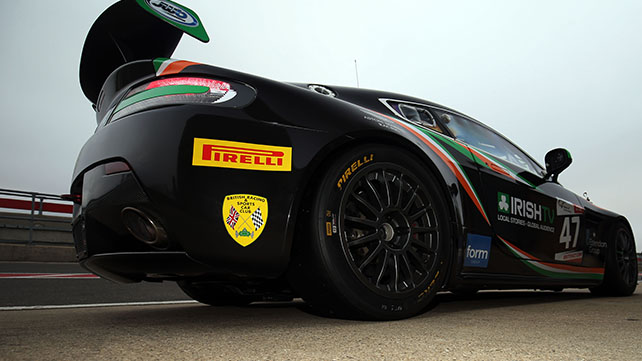 The GT3 rules form the basis for many of the strongest GT series worldwide, including the pan-European Blancpain GT Series. Pirelli will be transferring its know-how from Blancpain GT when it commences a multi-year deal to supply British GT this season.

Somewhat appropriately for a UK series, the Aston Martin Vantage GT3 has been a mainstay of British GT over the past few seasons. It was the car of choice for the champions of 2013 and 2015, and remains the most popular option for 2016 with no fewer than five examples entered.

This includes the #1 car of Beechdean AMR with double champion and team boss Andrew Howard partnering Ross Gunn, who steps up as the reigning GT4 champion. Entrepreneur Howard is proof of how British GT’s Pro-Am philosophy works, giving enthusiasts the chance to win outright. He won his two drivers’ titles alongside Jonny Adam, a factory racer for Aston Martin who has switched his British GT allegiances to the TF Sport team for 2016.

A number of other prestigious marques will also compete in GT3. The BMW Z4 GT3 will feature again, as will a McLaren 650S GT3 from legendary outfit Ecurie Ecosse. British firm Ginetta also takes on the biggest names in GT racing with its G55 GT3.

Returning to British GT is the Bentley Continental GT3. Behind the wheel will be Rick Parfitt Jr – the son of a Status Quo rockstar who has made a name for himself on the track – and Seb Morris, one of a host of young drivers switching their attentions from single-seaters to GT racing.

The latest incarnation of Audi’s all-conquering R8 LMS GT3 model will be fielded by Optimum Motorsport, while a new challenger on the British GT scene will be the Lamborghini Huracan. Barwell Motorsport enters two examples of the Italian machine, with works driver Fabio Babini and rapid Briton Alexander Sims rotating as the ‘pro’ in the team’s lead entry.

The GT4 class is enjoying possibly its strongest period yet. That’s exemplified by McLaren choosing British GT to launch its brand new 570S GT4 car with a race programme run by Ecurie Ecosse. GT4 has become ideal for young drivers taking their first steps into GT racing, and McLaren is staying true to that by signing Ciaran Haggerty, 19, and Sandy Mitchell, 16.

Aston Martin is popular in GT4 too with six cars entered. A pair of Porsche’s new Cayman GT4 Clubsports is set to feature, along with three Ginetta G55 GT4s, a Maserati GranTurismo MC, a Lotus Evora GT4 and a brace of Toyota GT86s.

With a great variety of great cars across these two competitive classes, driven by a number of top professionals and exciting up-and-coming racers, the 2016 British GT season is sure to be one worth watching.

www.facebook.com/BritishGT
Read more
Related Stories
250 motor racing championships tyred by Pirelli
race
China red or Ferrari red? or Paint the town red?
race
The most extreme competitions
race
MOST READ
Getting the show
on the road