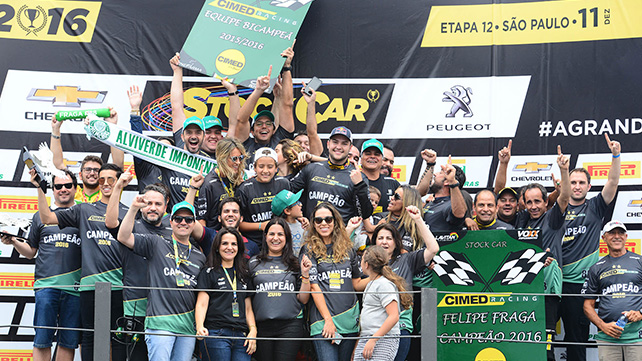 On Brazil’s race tracks, both on-road and off-road, one brand highlights in many different sports modalities: Pirelli. Official supplier of Stock Car, Formula Truck, Porsche GT3 Cup Challenge, Mit Cup, the Brazilian Touring Championship, the Brazilian Brands Championship, Superbike, Mercedes-Benz Challenge, and others, the Italian manufacturer always uses this huge laboratory in an attempt to seek for even better products for street vehicles.

Among many characters in this industry, we talked to two of them: Felipe Giaffone, four-time champion of Formula Truck, and Marcos Gomes, a winning Stock Car pilot. Both pilots talked about their track activities, the competition and, particularly, the relation between Pirelli and the motorsports using their categories as examples.

Felipe Giaffone: four-time champion of Formula Truck works in and out of race tracks
Felipe Giaffone, 41 years old, was born in São Paulo and won his long-awaited fourth Formula Truck championship on Saturday, December 10, 2016. The pilot, who had a sound IndyCar Series career in the United States, with one victory in 2002, was consecrated in Brazil, to where he returned to race in 2005 in the heavy-vehicle category.

The first stage took place in Goiânia, in April that year, and he got a fifth place. After two championships learning the dynamics of the category, Felipe won for the first time in 2007, in the Fortaleza stage, and he hasn’t stopped ever since. By the end of the 2016 season, he had 27 wins, 29 pole positions, four Brazilian titles (2007, 2009, 2011 and 2016) and one South American title (2011), figures that put his name in the Formula Truck history.

He dedicates his days both to motorsports and non-motorsports activities. Some of these activities involve his work as sports commissioner of the International Automobile Federation (FIA) and being the Chairman of the Brazilian Association of Automobile Pilots (ABPA).

How was the 2016 Formula Truck season?
I’ve had some nice years, but since 2011 I would always almost win. Now I did it, and it was good. It was a difficult championship because of the new rule on engine restrictors that the leaders were required to install in their trucks, which is something good to the category, making everything more balanced. The main difference was that my truck was very consistent thanks to the good match with Pirelli tyres.

During the championship, I won four stages and I sincerely think it could not have been better. Of all those years I competed, this was the most solid one, with less breaks or difficulties. For me, it was excellent.

What is your opinion about Pirelli entering Formula Truck?
It was so smooth, we expected many changes, but it changed for the better. The truck was more consistent during the races, with fewer variations. I did not even have one tyre rash during the year, even when I missed the brake. The product is more resistant in that respect, when it becomes necessary. Pirelli’s support during the year was very important. The Pirelli staff provided accurate information, which gave us confidence to follow the path traced by the technical team.

And what about performance?
Pirelli’s tyre is more durable and stable in races. When it comes to calibration, everything is so consistent that we don’t have to be looking too much, we don’t stray from the pattern and the limits, which gives us confidence, because we don’t need to push to get performance. It’s already there, always.

What kind of work you do at ABPA?
ABPA is an idea that came from the pilots, so together we can improve motorsports in Brazil. We will participate in the election of the Brazilian Automobile Confederation (CBA) and demand a new chairman. Pirelli, as ABPA supporter, was critical for its existence and survival, considering that we need partners to pay the employees of the association, which is a non-profit entity.

What about the Brazilian Kart School?
The school is a project funded by FIA (70%) and CBA (30%) emulating the schools existing in France. Our purpose is helping discover and develop new talents, and we already have three schools in operation. One in São Paulo, in the Granja Viana Kart Race Track, one in Minas Gerais and another in the Southern Region. It’s something never seen before, a model with enormous potential to make the sport popular.

Marcos Gomes: champion wants to win the Stock Car in 2017
In 2015, when the checkered flag ended the championship, Marcos Gomes from São Paulo could finally celebrate his first Stock Car title. It was not an easy feat. However, it was a prize for the pilot who during 12 stages in the season was bold and consistent. Gomes, aka Marquinhos, won a total of three races (Santa Cruz do Sul, Curitiba and Campo Grande), with five pole positions (one at Velopark, two in Curitiba, one in Goiânia and one in Campo Grande), and three fastest laps (all of them in Curitiba). The pilot had 242 points, 30 points ahead of Cacá Bueno, who was second in the season.

It was a big celebration for the son of the four-time champion of the category, Paulo Gomes, one of Brazil’s greatest automobile racers. In 2016, the challenge was set: stay fit and win the second championship. This could have been the picture in the first half of the season, but successive problems eventually stripped him of any chances of fighting for another title. Even with no chances to become a champion, the last stage at Interlagos (São Paulo), on December 11, was thrilling. Felipe Fraga, Marcos teammate, became the youngest champion in the history of Stock Car.

How was 2015 for you?
It was a perfect year. Actually, it was similar to 2016 for Felipe. I had pole positions, won races and had no mechanical problems that would cost precious points like this year. No doubt, it was my best year in Stock Car.

However, in 2016 you didn’t have the same luck. But how do you rate this season?
Not good. I started well, won two of the first three races. However, from Cascavel on, when I was in the front, my car broke and things would not work out for me. Cars hit me, I had breaks, accidents, and this is how I lost any chance to fight for the title. I started to drive defensively because I could not afford losing more points. It was a tough year, without the same confidence as before. I want to leave all of this behind and start 2017 as I did in 2016.

There are already some news for 2017, one of them being Denis Navarro and Cacá Bueno now working in your team. What are your expectations?
It has everything to be a good fight inside the team. We know the limits, but we will work for the same team and sponsor. That is, four equal cars fighting to win. I believe that it will probably be one of the strongest teams in history. After all, we have three champions. Felipe has one title – and so do I -, and Cacá have five. I don’t know what can come from this fight, but we will surely work together to fight for the first positions.

How do you see Pirelli’s work in the Stock Car?
No doubt it’s something exceptionally different in Brazil. We don’t have any other manufacturer that has given us so much confidence and excellent structure as Pirelli. All of this results in technology that is conveyed from race cars to street cars, using the Stock Car as a big laboratory. I have raced with Pirelli since 2006, in the Stock Light, then I changed for some years to another manufacturer, but now I have Pirelli’s support again, and we are all very happy with the work we all carry out. I have the opportunity to race with a product that does not fail our cars.