He’s not even out of his teens but his remarkable comeback from a devastating injury has proved to be an inspiration to millions. We meet Billy Monger 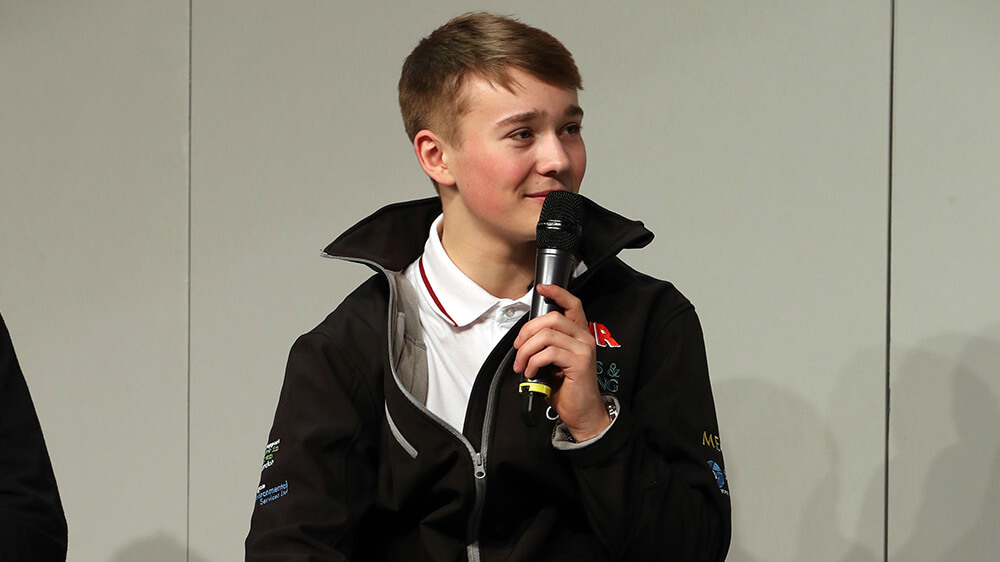 The accident and the aftermath
The world watched as his racing car slammed sickeningly into the back of another; then held its breath for days afterwards as his life hung in the balance. Motorsport is dangerous – it says so on every ticket – but in an era when drivers are seemingly indestructible and safety standards are higher than ever, nobody ever really thinks that anything bad is likely to happen. Especially not to a talented 17-year-old, with his whole life ahead of him. Yet that’s exactly what happened to Billy Monger at a Formula 4 race at Donington in England, on 16 April 2017. He survived, but both his legs had to be amputated.
Less than a year later, he was racing again – only this time in the next category up, Formula 3. And he finished on the podium in an emotionally spectacular comeback.
A lot had happened in the meantime of course, starting with the world-famous charity fundraising campaign to help Billy get his life and career back on track, supported by people like Lewis Hamilton and Nico Rosberg.
“For the first few days I was in an induced coma, so obviously I don’t remember anything of what happened immediately afterwards,” says Billy. “I just woke up to this…incredible situation. I felt like the person who had turned up late to the party! It was all a bit overwhelming.”
Billy’s easy, almost self-deprecating manner might make it easy to underestimate the profound psychological effect of the seismic event that changed his life. “I’d say that what happened was much harder to deal with psychologically than it was physically,” points out Billy. “Not just the accident, but you have to learn to live your life differently and suddenly you also have this high profile that was never there before. It’s a lot to take in.”
Against this traumatic backdrop, Billy’s racing return has restored some much-needed normality. He first tested a Volkswagen Fun Cup car in July 2017 (essentially, a hot rod loosely based on the Volkswagen Beetle) and then, when he saw for himself that none of his fundamental ability as a racing driver had been lost, he quickly put together a deal for this year’s BRDC Formula 3 championship, which is exclusively supplied by Pirelli.

Recovery
“In terms of my career trajectory, short-term at least, the accident didn’t make too much difference as I only lost about half a season: and in a category that I felt I’d reached the top of anyway,” says Billy casually, in the tones of someone who has just taken a sabbatical rather than undergone a life-defining experience. “The likely plan was always to go to Formula 3 anyway this year, so in that respect, nothing’s changed. Immediately after the accident, my focus was just on trying to get back into racing in some shape or form; but to be honest, I didn’t think it would go this well. So, now that it looks like I can do what I planned to do, that definitely helps things feel a bit more normal. Probably the weirdest thing about the period straight after the accident was not racing. Racing is what I’ve always done. So perhaps the accident actually made me realise how much racing meant to me and how much it’s part of my life.”
It’s a remarkable speech, made all the more poignant by its obvious sincerity. But it’s something that a number of drivers whose realities have been altered often say, and after his accident Billy had the chance to speak to other people who had suffered similar situations, including Alex Zanardi.
“Alex was a big help and support,” remembers Billy. “He gave me lots of useful advice: not just about racing but also about life. For example, he told me that it’s normal for a racing driver to want everything to happen at 100 miles an hour, but that some things – such as learning to walk with prosthetics – were going to take time, and not to get frustrated during that time.”
Billy also met Frederic Sausset, a French driver who lost both his arms and legs to a bacterial infection and yet managed to compete at the Le Mans 24 Hours. “Fred is a remarkable inspiration and it’s definitely in my plans to do Le Mans one day,” says Billy. “I don’t know if it’s going to be sooner rather than later, but it’s there. The dream is still Formula 1 and that’s not gone away, but only I know if I’ll be able to step up from category to category to get there.”

Walking tall
In Formula 3, his car has been adapted by the Carlin team to feature a hand throttle on the left, then two paddles on the right that are used to upshift and downshift. He brakes with a short prosthetic attached to his right leg. “I spoke with lots of people about the different systems they use, but obviously no two peoples’ injuries are exactly the same, so you have to come up with a system that works for you,” says Billy. “It was all engineered by Carlin in-house, who did an amazing job. But there’s still a lot to get used to. Now I obviously drive and feel the car in a completely different way compared to how I used to, and that’s something I’m still learning. I’m certainly out of my comfort zone.”
In spite of it all, the accident has made him mentally more resilient. “I’d definitely say I’m psychologically stronger now,” points out Billy. “I’m never scared in the car; in fact, you know that you’ve been through this experience already, so you worry less about things. There was obviously a chance of me not being here at all after my accident, so if you look at it that way…”
The positivity of ‘Billy Whizz’ is infectious. But more than that, he’s at peace with himself and this new life, whatever it may hold in future. “For my next move, ideally, I’d like to go on to something like international Formula 3, then perhaps Formula 2, then who knows after that,” he concludes. “Like I said, Formula 1 is still my dream. But it depends on a lot of things: like sponsorship and my own ability to perform. You have to take it one step at a time. For now, I’m just happy to be racing again.”
And those things that Billy describes as “steps” – well, in reality, they are giant strides. From a young driver who doesn’t need his own legs to walk taller than ever.