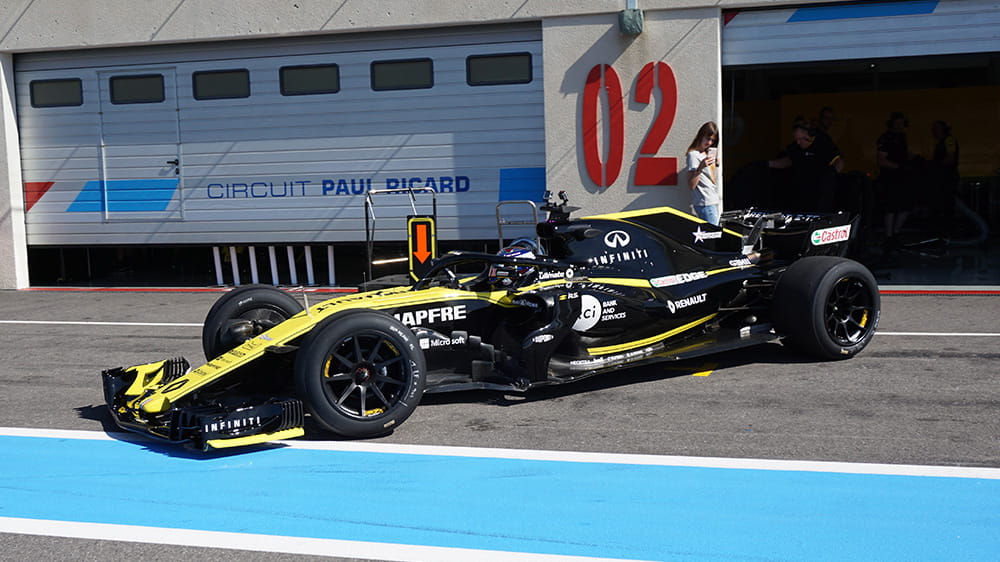 As one era draws to a close, another begins. There were two Formula 1 cars on track at Paul Ricard last week: arguably the most beautifully-located circuit in the world, nestled deep among the vineyards of the Bandol region, where medieval villages perched on mountains overlook the sparkling Mediterranean in the distance.

Yet the actual track is about as high-tech as it gets, with a mind-bending number of different configurations, an inbuilt sprinkler system, and even high-abrasion colourful stripes, which can bring any car that strays off the circuit to a stop in a matter of seconds.

The past and the future combine at Paul Ricard, and that’s exactly what we saw last week. While Esteban Ocon, in a Mercedes, completed what could be the final development test for 13-inch Formula 1 tyres – a size that has characterised the sport for decades – the new 18-inch tyres to be adopted from 2021 made their debut at the same time, attached to a 2018 Renault mule car, driven by Sergey Sirotkin.

For once, the dominant Mercedes wasn’t the star attraction on a race track. Instead, all eyes were on the year-old Renault as it nosed out of the garage and into the pit lane just after 9am on a bright Provencal morning; the dazzling yellow of its livery blending in almost seamlessly to the rising sun.

The future is now

Because the sun was rising on a whole new era of Formula 1, in fact. The very first sign of something entirely new and different lay in the oversized tyre warmers that lay on the garage floor, which required some degree of effort to pick up – something that pit crews will soon have to get used to.

Once the 18-inch tyres were bolted to the car and it was dropped to the ground, it was like a whole new formula had presented himself. The look of a Formula 1 car on 18-inch tyres is somehow much more than the sum of its parts: the car appears to be generally more aggressive and imposing, almost intimidating to look at.

Of course, this was just a 2018 mule car, hastily adapted to accommodate the new size for testing purposes only. Once they are part of the new-generation 2021 Formula 1 car, which will have been holistically designed with bigger tyres as part of the overall concept, the effect will be even greater still. Mule cars, as the unflattering name suggests, often look somewhat awkward when testing new parts. But this just looked right from the very start. The amazing thing, as is so often the case, was just how quickly you got used to it. The only negative is that from now on, F1 cars on 13-inch tyres will always look a bit diminished…

The way the new 18-inch tyre went was as good as the way it looked. Sirotkin – Renault’s Russian reserve driver who completed a full season with Williams last year, having made his F1 debut as a Sauber tester in 2014 – was able to dial himself straight in to the car and the track, despite having mostly concentrated on endurance racing this year. One installation lap, and the wide grin across his face already told the whole story.

For two days he continued to drive, solidly pounding out lap after lap, and attracting considerable interest from passers-by (not that there were many, with Paul Ricard having put security in place that the FBI would be proud of). One of them was Ocon, who will be driving for Renault next year and beyond. He too had a big smile on his face when he saw the new-look Renault for the first time – and he wasn’t even driving it.

In total, Sirotkin completed 213 laps of Paul Ricard – around four French Grand Prix distances – with the new 18-inch tyres performing perfectly first time out. One notable aspect he found was how the car responded to driver inputs more directly, with a smaller and stiffer sidewall.

Thanks to the information obtained, plenty of data has now been gathered that will be used to shape the future development direction. Of course, there’s plenty of work still to do before 2021, including some more 18-inch tyre testing this year with McLaren next month at Paul Ricard and Mercedes in December in Abu Dhabi. But the new era of Formula 1 has already got off to a flying start.