Baku to the future

Baku is a new kid on the block, right? Wrong – there have been three racing venues in the Azerbaijani capital before the current street circuit came into being 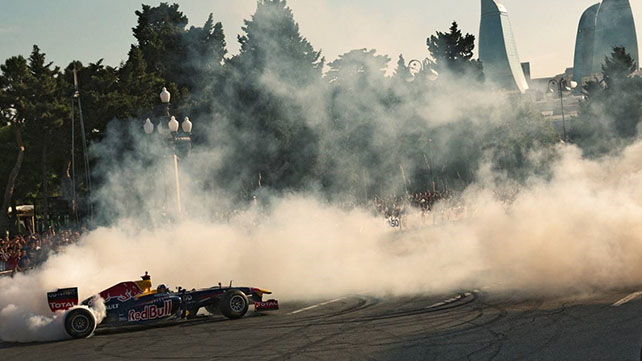 In the beginning
Baku may be a relatively newcomer to the world of Formula 1®, but it’s already hosted GT racing (three times) and Formula 1® – at three different street venues.
Everything started in 2012. This was the first real year of international motorsport in Azerbaijan, during which the Baku City Challenge arrived: a non-championship GT race in October for GT3 specification cars, which was the brainchild of German businessman Hartmut Beyer. The race was held on a short 2.144-kilometre circuit close to Government House, which is directly behind the current F1® paddock.
The next year, Baku was a fully-fledged round of the FIA GT Series on a different circuit, with the entire field running on Pirelli tyres. There was a brand new track, more than double the length of the old one at 4.380 kilometres, which ran by the Baku Crystal Hall, the host venue for the Eurovision Song Contest in 2012.
Despite a number of delays to the race start due to the artificial kerbs that had been installed falling off, the drivers liked the track, which was much more ambitious than the original point-and-squirt layout from the year before, resembling one of Formula 1®’s American street circuits from the 1980s.
As former Le Mans winner Nick Tandy, who drove in the 2013 Baku GT race, put it: "It’s got a nice mix of fast and slow corners, and it’s pretty difficult. It's the kind of track on which the driver can make a big difference, so that has to be good."

Enter Blancpain GT
The same circuit was kept for 2014, although the championship was by now a round of the Pirelli-supplied Blancpain Sprint Series, headed up by promoter Stephane Ratel. Once again Baku marked the end of the season, with Audi drivers Stephane Ortelli and Laurens Vanthoor winning in 2014 and 2013, while the original 2012 race on the short circuit was claimed by Frederic Makowiecki and Stef Dusseldorp in a McLaren. For those wondering, the winner of the Eurovision Song Contest in Baku that year was Sweden, thanks to “Euphoria” by Loreen. Luckily for them, the winning GT drivers seem to have enjoyed rather more enduring fame…
The winners however weren’t the most famous drivers ever to have competed at the GT encounter in Baku. Lining up for the first race in 2012 were Jacques Villeneuve, the 1997 F1® World Champion, and former grand prix driver Jos Verstappen: team mates in a BMW Z4. In the end, they finished a respectable sixth from 10th on the grid. Four years later, it’s another Verstappen who will be aiming to make the headlines.

From past to present
The current F1® track is to the north of the 2014 layout, but this won’t be the first time that Formula 1® cars have run in Baku. David Coulthard first demonstrated a Formula 1® car on the streets of the Azerbaijani capital in June 2012, when he took a Red Bull RB7 around what is probably the world’s biggest flag (measuring 75 by 35 metres, flying 162 metres high), located in what is unimaginatively called National Flag Square. It was a small temporary layout for the purpose of entertaining fans – but for these purposes we’ll count it as a third circuit configuration in Baku, prior to the current track…
Around 45,000 people showed up to watch him do it, underlining the popularity of F1® in the country. “I didn’t quite know what to expect, but I was pretty overwhelmed,” reported Coulthard at the time. “We had a fantastic welcome. During the final lap, I could see a little kid shouting my name: I think that moment made my day!”
The fourth venue in Baku is even more spectacular, being the fastest street circuit in F1® and the second-longest track on the entire calendar. Renowned circuit architect Hermann Tilke designed the track from scratch for the inaugural grand prix last year, but of course many of the lessons from previous races in Baku have been taken into account. Azerbaijan may still be quite a new fixture, but there’s a surprising amount of motor racing heritage…

Read more
Related Stories
In the footsteps
of Monaco
race
An amazing
birthday present
race
Canada dry
race
MOST READ
Jacques Villeneuve,
the rising and setting of the son