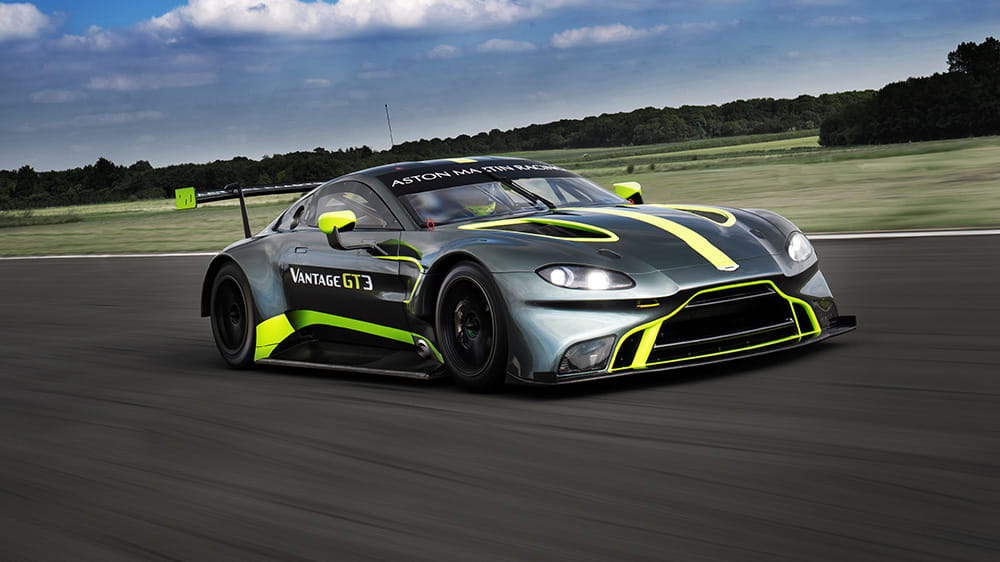 The stunning, super-equipped DB5, like many British touring cars, has inspired a seeming-ly endless series of films and races. Others have included the V8 Vantage, the Vanquish V12, the DBS V12 and finally the DB10. The Vantage, regarded by many people as the first real British supercar – an epithet earned by its top speed of over 270 km/h, an impressive performance for a four-seater in 1977 – is the only car, of those mentioned above, with a name that still features in the exclusive Aston Martin price list. The Vantage can also boast an important and probably unbeatable record: that of the best-selling car in the history of the marque.

Last March the Vantage GT3 received authorisation from FIA to compete in the current racing championship. The race version of the new Vantage is powered by the same AMG 4.0 litre V8 turbo engine found on the road model, but has been specifically optimised by the engineers at Aston Martin Racing to achieve 535 horsepower. And so after seven years of success, the era of twelve-cylinder cars is now at an end for gentleman drivers fond of the English brand. Internally the car has a steel roll cage, a central console and carbon dashboard custom-made by Cosworth, a ZF eight-speed sequential gearbox, an Alcon clutch and braking system and Ohlins four-way adjustable shock absorbers. A winning element in this Vantage is undoubtedly its dry weight: at 1245 kg it is approximately 60 kg lighter than the BMW M6 belonging to the same category. Its weight distribution is 50:50.

Compared to the road version this GT3 is significantly wider, has a highly complex aerodynamic kit and is decidedly more aggressive at both front and rear. The front end is slightly more pointed, and two air intakes have been added incorporating horizontal slitted extractor profiles on the muscular bonnet to improve engine-cooling performance. Further down the front spoiler now benefits from two external corners in which two large sections have been carved out to convey the air inwards; the grille in front of the central air intake has been replaced by horizontal splits. The sides of the car feature generous miniskirts and even wider wheel arches, and new-design side mirrors, transparent polycarbonate windows and lateral outlets complete the aggressiveness of the look. At the rear a large, variable-incidence spoiler and an enormous, optimally-shaped carbon extractor profile help to add the finishing touches to a fast, elegant and menacing car.

The new Vantage GT3 has a highly prestigious heritage to uphold. The old Vantage V12 GT3, on the road since 2012, has been successful in winning quite a few races in all four corners of the globe. But thanks to its lighter and more rigid frame, its lower weight and its much more efficient engine, the new weapon in the Aston Martin armoury can certainly match and surpass the performance of its predecessor on the race track. Will it be able to win more races?