What's the national sport of Sri Lanka? You might think cricket. But there and again, you might just be wrong.

Malagamuwa the magnificent
In the Lamborghini Super Trofeo, there’s one guy with a fan club that redefines the meaning of the word tifosi. A driver with a devoted, passionate colourful army of followers… some of whom have travelled for thousands of kilometres to watch their hero in action.
That hero is Dilantha Malagamuwa: a poetic name that nonetheless doesn’t exactly trip off the tongue as a synonym of motorsport stardom. Yet remarkably Dilantha inspires as passionate a following as any Senna or Schumacher. Because while there have been other successful drivers from Brazil and Germany, there has only ever been one man to cut it in the international world of motorsport from Sri Lanka.
So now, fans come from Sri Lanka to follow him: carrying air horns, flags – and on one occasion – national costume. The main sport on the island is cricket: a legacy from the English occupation of the nineteenth century. But based on what you can see at every Lamborghini Super Trofeo round, the second-most popular activity must be motorsport. Visit Dilantha’s motorhome to find out: except normally you can’t because there’s a crowd about 20-deep in there, chanting his name and singing what is probably the Sri Lankan national anthem. Or the Dilantha Malagamuwa fan club song. Either way, everyone seems very happy about it. And if you happen to fight your way through the crowd and meet the man of the moment, he has a remarkable story to tell. 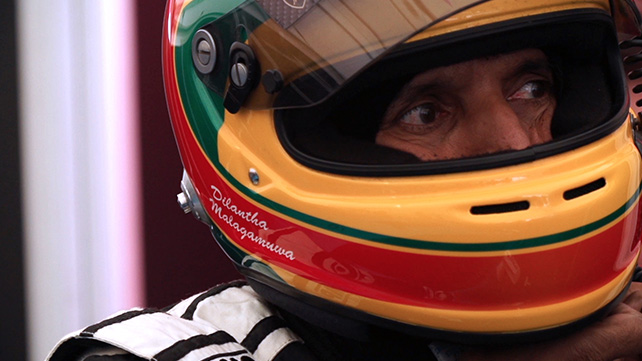 Turning Japanese
Dilantha grew up in Sri Lanka’s bustling capital, Colombo: a place where motorsport was non-existent apart from as an amateur activity on everyday roads. “You see a few crazy drivers, but the roads are good fun!” he says, with a characteristic broad grin. He started his competition career by racing motorbikes when he was 16. But his parents disapproved. So, aged 19, he did what most people would normally do under those trying circumstances: he ran away to Japan. There, enthusiasm for motorsport knows no bounds. So the young Dilantha managed to race everything: from bikes to saloon cars to GT cars. He soon proved that he had the talent to match his wayward ambition and his life changed. Not just on the track; he also met his wife in Japan and started a business. “I just followed my dreams,” he explains, simply. His job is also his passion: he buys and sells classic cars, often to order for specific customers he meets through racing – making other peoples’ dreams come true as well as his own. Now based in Malaysia, he still visits Colombo about once a month to see his mother. He’s clearly been forgiven for fleeing the family home when he was 19.
It wasn’t long before Dilantha fell in love again – but this time with Lamborghini. “As soon as I saw these cars, I was hooked,” he explains. “But it’s not just because they have the best cars; it’s also because they have the best people. Just like Pirelli!”
The two are inextricably linked after all: every Lamborghini ever made has rolled out of the factory on Pirelli tyres. And exactly the same applies to the race cars.

Riding the crest of the wave
Dilantha has enjoyed a huge amount of success with Lamborghini, winning the Super Trofeo Asia Series last year and then winning races in the European series, which he is contesting this year. He attributes some of his success to the tidal wave of popular support that follows him at every race meeting. “Some guys actually come to the races from Sri Lanka, and then there are other people originally from Sri Lanka who are living near the places where we race,” Dilantha explains. “It’s because Sri Lankans are very patriotic. I’ve been carrying the Sri Lankan flag for nearly 30 years now, so people recognise me a bit. But it’s fantastic that these guys come along and it makes me so proud and happy. Honestly: Sri Lankans are the best people in the world!”
Naturally, he drives a Lamborghini when he’s at home in Colombo: a reasonably rare sight in itself; but also one that underlines his reputation as ‘the Lamborghini man’ and one of his country’s most prominent sporting ambassadors. In fact, he’s even been chosen as Sri Lanka’s ‘sportsman of the year’. And he definitely wins the prize for ‘best fan club’ as well.

Read more
Related Stories
Karting hopefuls in Alonso's footsteps
race
Where there’s a Wilson, there’s a way
race
Sainz of the times
race
MOST READ
Getting the show
on the road