An Itala from Peking to Paris: story of the 1907 automobile race 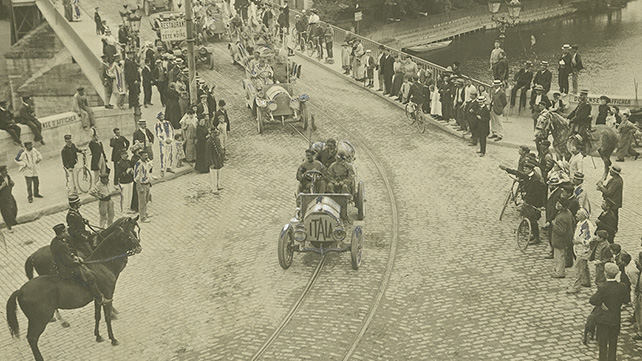 “What we have to demonstrate today is that now that man has a car, he can do anything and go anywhere. Does anybody accept the challenge of going from Peking to Paris by car next summer?”, this is the text printed in the announcement made on French newspaper Le Matin on 31st January 1907.

40 crews accepted the challenge, paying a down payment of 2,000 French Francs, but only 5 teams showed up at the starting line in Peking at 8 am on 10th June 1907: a Contal tricycle from France, two De Dion-Bouton vehicles, also from France, a Dutch Spyker, and an Itala from Italy.

The event was not a speed race and there were no prizes upon arrival, aside from the glory of having accomplished an epic undertaking; there were no set rules and each team had to oragnise oil, fuel and tyre supplies independently.

From the very start of the race, the supremacy of the Italian team was obvious; it consisted of Prince Scipione Borghese and his chauffeur Ettore Guizzardi, accompanied by special correspondent for the Corriere della Sera newspaper, Luigi Barzini.
The Itala fitted with Pirelli tyres driven by the prince had been outfitted in a highly meticulous way: the mudguards had been replaced with removable planks, to be used as ramps to overcome any obstacles and, unlike the automobile diktat at the time, it was fitted with front and rear tyres of the same size, to make them interchangeable, thus reducing spares.

The 40 Horsepower of the Itala and its weight of one and a half tonnes helped the Italian crew overcome the toughest sections of the race without foregoing speed, dominating over the other competitors who instead had opted for less powerful - yet lighter - vehicles: the Contal tricycle did not manage to cross the Gobi desert and never made it to Paris, theDe Dion-Bouton vehicles, with their 10 Horsepower, came in 3rd and 4th place, the 15 HP Spyker managed to come second, but twenty days behind the Itala, who was simply unrivalled.

Ulan Bator, Moscow, Warsaw, Berlin, these are just some of the cities which the Itala fitted with Pirelli tyres travelled through before crossing the finishing line in Paris on 10th August 1907, welcomed triumphantly by a horde of journalists, video cameramen and an oceanic crowd.

”We arrived in Paris first, only changing two wheels”, went a telegram sent from the French capital in August 1907 by Prince Scipione Borghese, who won the race with a huge advantage over his rivals. For that time, on those roads, it was an exceptional result: achieved after 16,000 gruelling kilometres that punished drivers, cars and tyres. It was also an adventure that brought the public’s attention to the performance and safety of a product that would soon become recognised by the famous Pirelli logo that is now a well-known sight all over the world

The historic car, which is now kept at the Car Museum in Turin, travelled the length of the itinerary backwards in 2007 to celebrate the centenary anniversary of the great race.
10th June 1907 can be considered to be Pirelli's début in the world of motor sports, a début that coincided with a sensational success, and that has been consolidated over the last 110 years from race to road.