Mugello is a track that has a bit of everything, born out of an epic road circuit right up there with places like the Isle of Man TT course. And it’s where Ferrari will celebrate 1000 races 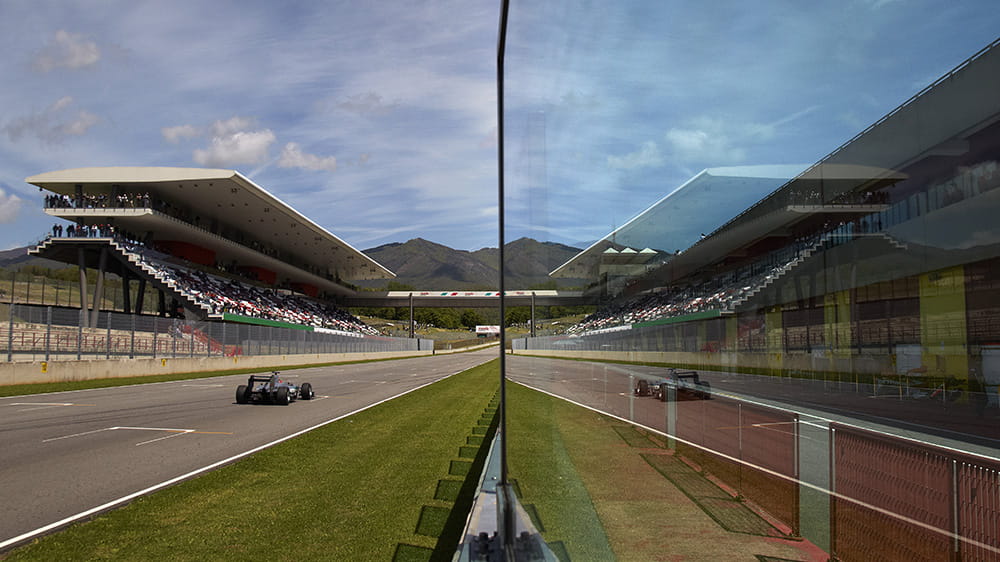 The world championship is calling for Mugello. On Sunday September 13, F1 will race at the Tuscan circuit for the first time. But seeing Formula 1 cars at the Mugello circuit won’t be a new experience in itself as they have already run there on several occasions for testing. In the case of Ferrari, that would be hundreds of times: with a series of drivers from Michael Schumacher to today’s stars.

Located just outside Florence it’s a track that is significant from both a sporting and technical point of view, testing all aspects of a car’s performance. That’s one reason why Ferrari bought the track in 1988, thereby ensuring they had two test tracks at their disposal close to the famous competitions department in Maranello.

You can sum up Mugello in one word: complete. The long start-finish straight is the only point on the track where the driver can rest his neck and arms. The rest is a bit of everything: up and down in a vertiginous rollercoaster throughout the length of the lap. In terms of elevation it’s not so different to the Red Bull Ring in Austria, but with the addition of some fast corners that put plenty of energy through the car and now make Mugello one of the most challenging venues on the championship. Straight after the pit straight, a right-hand corner leads into the uphill first part of the track: the Luco, Poggio, and Materassi corners make up  a really fast section that should ideally be taken as a straight line to benefit from maximum traction. Afterwards, there is the fast right-left of Casanova and Savelli and the two Arrabbiata corners. These are two downhill open right-handers, which modern Formula 1 cars are expected to take flat out at speeds in excess of 260kph. After that, there is another climb up to the highest point of the track: the Correntaio curves. Next is a steep descent to the two Biondetti corners, which almost act as a very fast natural chicane. This is where Valentino Rossi was just as fast – if not faster – than Michael Schumacher at the bike legend’s Ferrari test a few years ago: a true story.

So it’s obvious that Formula 1 will welcome a circuit such as this one with open arms. Unlike many modern circuits, which are littered with chicanes and so become a stop-and-go festival, without any really big corners, Mugello is old school. The layout is very technical but ultimately extremely human. You need courage, bravery and commitment to succeed. So Mugello will undoubtedly be a highlight of the first occasion in which there has been three Italian races in the world championship.

Leaving aside Monza, which has been on the world championship uninterruptedly since 1950 (with just one exception in 1980 when it fell victim to political infighting) and Imola – a well-known grand prix venue between 1980 and 2006 – Mugello is the fourth Italian circuit to have this honour. The third is the Pescara circuit, which was 26 kilometres long with average speed of more than 150kph. This hosted just one world championship grand prix in 1957, won by Stirling Moss in a Vanwall.

Another strength of the Tuscan circuit is its great tradition of motorsport in general, as it has hosted one of the most important rounds in MotoGP for several years. When the F1 drivers take to the track for the first time on Friday for free practice, they will largely be relying on simulator data before facing 59 laps over a 5.245-metre track on Sunday. But many fans will remember the old Mugello circuit: a 66.2-kilometre track used in the 1920s. It remained in place until 1970, with a lap that was nearly three times as long as the legendary Nurburgring Nordschleife: a blast through the Tuscan countryside past houses and villages, taking in all sorts of corners and surfaces. Probably the closest thing to it was the legendary TT circuit on the Isle of Man (which still exists today) and provides perhaps the biggest test of bravery seen anywhere in motorsport.

Mugello is a true showcase of everything that’s spectacular about racing. All the bases are covered, as is also the case at the Nordschleife or Isle of Man. It really is that epic. And there’s no better place for Ferrari to celebrate its 1000th race, right in the heart of Italy.