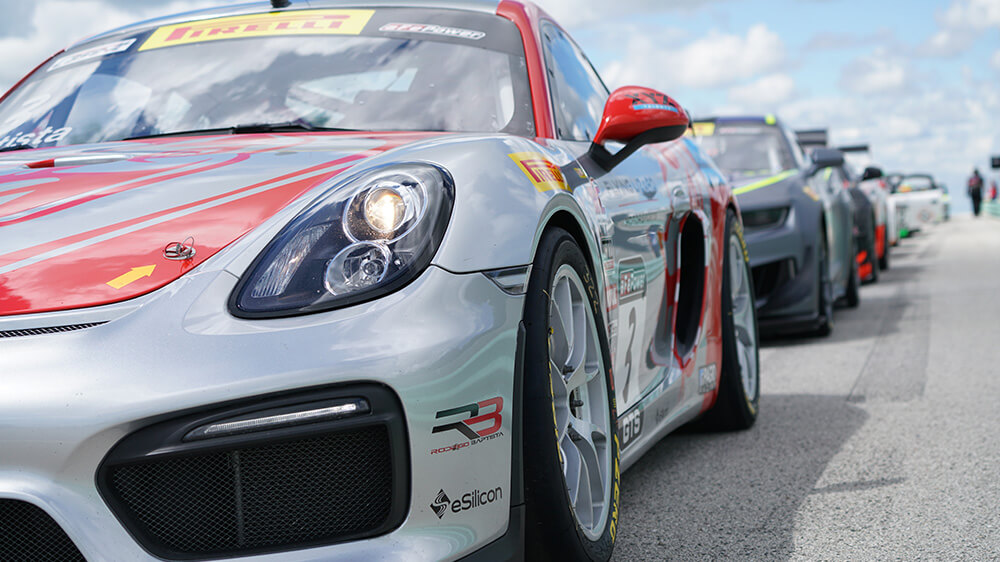 On Every Racer’s Map
Every year, Pirelli descends on Road America, one of America’s most celebrated racetracks for the Pirelli World Challenge in its role as exclusive tire supplier and title sponsor to North America’s biggest GT production based road racing series.  The motorsport series’ covetable line up of top drivers, teams and vehicles – equipped with Pirelli’s best P Zero racing rubber – is the perfect match for this famous four-mile, 18 turn racing circuit that has challenged the world’s best racers for over 60 years. Road America is situated three miles south of Elkhart Lake, Wisconsin on State Highway 67. Every year it hosts 800,000 visitors at over 425 events, who all enjoy both top level motorsports action and beautiful scenery amongst the 640 acre resort-like grounds.

A sign outside turn 5 at Road America proudly declares the facility as “America’s National Park of Speed”, a nickname bestowed to the circuit for its expansive natural-terrain surrounds, as well as its extended straights where 200mph (320 km/h) speeds may be reached. The track has varied points of elevation and high-speed corners, including one on the backside famously known as “the kink”. The track is unique compared to others in that it is virtually the same today as it was in 1955, apart from a few safety modifications (expanded pit lanes). So it is considered one of the world’s finest, most challenging race courses due to its length, as well as one steeped in history and tradition.

The ‘American Dream’ of Racing
Road America was the brainchild of Clif Tufte, a highway engineer who chose the 525 acres of Wisconsin farmland and laid down the track. After the state banned racing on public roads, Clif realized the potential of having a dedicated racetrack in the area and rallied local citizens and leaders of the Sports Car Club of America (SCCA) to fund this project – a real ‘American dream’ story come true. Clif was so passionate about the track’s maintenance he used to roll diagonally over the track every day to maintain the surface quality.

Road America was ‘christened’ with its first motorsports race on September 10-11, 1955. This 148 mile race sanctioned by the Sports Club Car of America (SCCA) was designed to celebrate the era’s large sports cars, and was won by Phil Hill in a Ferrari Monza over Sherwood Johnston in a D Jaguar. This tightly contested duel and finish between the two drivers set the precedent for top racing action in the years to come.

“National Park of Speed” Highlights
In 1956, the year after its inception, SCCA held its first June Sprints event, its longest running amateur road racing event. In the same year the Road America 500 was born, a name denoting the 500-mile grueling endurance race. The race has since been shortened to 300 miles (approximately 500 kilometers – therefore keeping the spirit of the ‘magic 500’ number alive).

The Canadian-American Challenge Cup is another memorable racing series associated with RA history, as it had minimal rules during its run from 1967-1974 – only two seats and fendered bodywork…equaling unlimited engines, tires and unprecedented speeds. The McLaren team dominated the series’ early years, followed by Porsche.

Many heroes have graced Road America, including F1 champion Jacques Villeneuve, who two years prior to winning the ultimate motorsports prize, was navigating the epic turns at Road America to seal a victory in his first year of CART competition. On a race restart, the young Villeneuve shot past the Penske team driver favorites to take the win unexpectedly. He won at RA the next year and the following, was crowned F1 champion; showing that this track has been an incubator for some of the motorsport greats.

Once again Road America hosts the Pirelli World Challenge and the Trans Am series – another Pirelli shod motorsports series in the US –as well as numerous other motorsport events (two and four wheel) spanning all racing levels and interests, including its famous vintage racing event held in July every year since 1982.

Pirelli is partial to Road America’s rich racing history and platform for motorsports, as it aligns with the very tenants of our brand. We look forward to racing challenges for our tires and Road America is no different… we wish all the Pirelli World Challenge drivers the best of luck on the track!

Read more
Related Stories
How is Paul Ricard preparing for the return of the French GP?
race
Colour
on the track
race
Ten years of
Lamborghini Super Trofeo
race
MOST READ
Getting the show
on the road