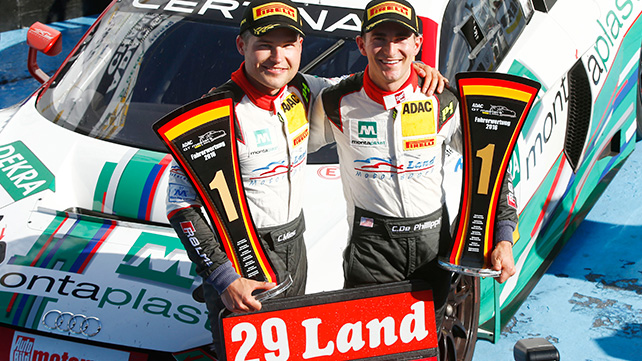 Spectators were treated to seven suspense-packed racing weekends full of highlights. Due to the high performance density of cars and drivers the season remained gripping until the very end. The overall winners were not crowned before the final race, when Connor De Philippi (23, US) and Christopher Mies (27, Germany), of team Montaplast by Land-Motorsport, drove their Audi R8 over the finish line. Their eighth place allowed them to relegate their closest rivals, Jules Gounon (France), Daniel Keilwitz (Germany, both Callaway Competition) and their Corvette C7, back to second place.

Remo Lips (33, Switzerland, RTW Racing), who has been an ADAC GT Masters entrant since 2010, claimed the victory in the Trophy class, while Montaplast by Land-Motorsport won the team title for 2016.

The drivers covered no less than 2.049.125 kilometres during the 14 contests and seven racing weekends, relying completely on their Pirellis for all kinds of track and weather conditions. For every single event, the Italian manufacturer delivered 500 slicks and rain tyres ranging from dimension 305/660-18 to 325/705-19. Each car was provided with three sets of slicks, which had to be used for all training sessions, qualifyings and races. This already points to the tyres’ high durability – another defining feature of the Pirelli P Zero next to the sheer performance.

So the cars managed the narrow turns at the Sachsenring just as well as the special challenges of the Red Bull Ring: Here the first two track sections are extremely fast, the third rather slow in comparison, but technically extremely demanding. The P Zeros delivered top performance at all weather conditions, staunchly enduring extreme heat at Lausitzring as well as well as torrential rain in Zandvoort.

Yet the teams at ADAC GT Masters did not have to rely solely on the tyres, but were also provided with professional advice by Pirelli technicians during each racing weekend. A strong team of engineers and mechanics covered each event on-site. The feedback of the teams and drivers gives a wealth of technical data and insights which flows into the continuous development, also as in 2017 the Super Sports Car League will start into its eleventh season!