He’s taken the long route to the top of British rallying, but Welshman Matt Edwards now has a historic double just around the corner 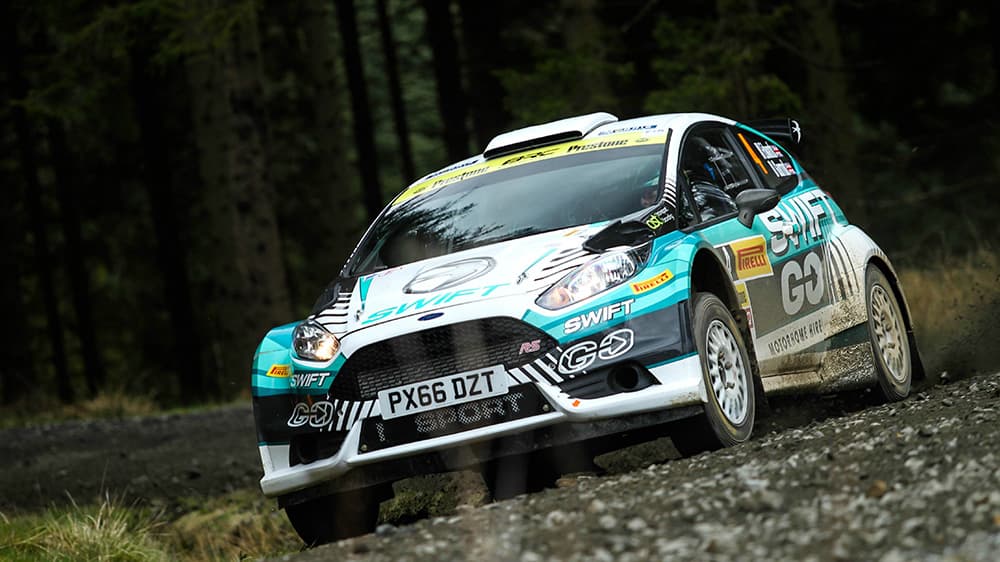 The prize awaits
Every autumn the best rally drivers on the planet descend on North Wales for Britain’s round of the world championship: one of the most historic and demanding tests on the calendar. Among them this year is one local man on the brink of realising a dream.

Matt Edwards will take the start of Wales Rally GB in his Ford Fiesta R5 equipped with Pirelli tyres with the hope of securing the British Rally Championship title. He begins the event as the clear favourite, having won every BRC round held so far in 2018.

If he pulls it off, Edwards would be the latest in a long line of drivers to use Pirelli tyres to win the British title: a list that includes Colin McRae and Richard Burns, who both later went on to win the world championship with Subaru and Pirelli.

Edwards is in fact already a champion 2018, having earlier clinched the BTRDA Rally Series run on gravel rallies across England and Wales. Now he is chasing a historic double, aiming to become the first driver to win both titles in one year.

A long and winding road
The route to the top has been a long one for Edwards. He grew up around rallying, with his father competing as a co-driver, but didn’t start out himself until he used his student grant to buy a Vauxhall Astra to turn into a rally car. Three years later, he used the car to win his class in the BTRDA series.

With a limited budget, it wasn’t easy for Edwards to progress, but with hard work and talent he was able to impress potential sponsors and continue living his passion. After trying his hand at historic rallying, he made the move into the BRC in 2016, winning the secondary class with a self-built Mitsubishi.

That earned Edwards a step up to the top category for 2017, where he finished third overall. He ended the year with his WRC debut on his home event: 12 months later he is back to try and wrap up his historic double.

Season of success
Edwards started 2018 with his eyes set firmly on the BRC title. With that in mind he joined forces with the top-line M-Sport operation to run his Swift Rally Team Fiesta, partnering with Pirelli for both of his campaigns.

The BRC is one of the most significant national rally championships in the world, with many stellar reputations forged on its wide variety of stages and weather conditions. Several up-and-coming drivers have come from overseas to cut their teeth in Britain, including Finland’s Ari Vatanen. It’s a tough test for a tyre supplier too, with both gravel and asphalt rubber required in a wide range of different compounds.

One of the most popular events, as its name suggests, is the Pirelli International Rally, which got the 2018 season underway in April from the company’s factory in Carlisle. Heading out into the fearsome gravel stages in the Kielder Forest, Edwards proved unbeatable, taking his maiden victory.

Next came the Ypres Rally in Belgium, where the British crews had to go up against the local asphalt experts, plus home-grown WRC hero Thierry Neuville. Competitive from the beginning, Edwards overcame electrical and power steering issues to take maximum points again.

Round three was also on asphalt, but through the very different hedge-lined lanes of the Ulster Rally in Northern Ireland, complete with torrential rain. Following a sensible start in the difficult conditions, Edwards gradually upped his speed and climbed to the top of the leaderboard to complete a superb hat-trick.

With the three-day Wales Rally GB split into two BRC rounds, Edwards’ glory is far from secure yet. But few will be betting against him against on his home roads.

Read more
Related Stories
Rock and roll
rally star
race
Red, light blue and dark blue: the colours of motorsport
race
How to go quickly on Rallye Monte-Carlo… by stopping
race
MOST READ
Jacques Villeneuve,
the rising and setting of the son