What was your favourite car at the Autosport International Show? Here’s ours

Monte or bust
The most famous rally of them all, Monte-Carlo, has drawn to a close with Sebastien Ogier triumphing once more in his Ford Fiesta WRC, but go back nearly 50 years ago and there was only one car to beat in the snowy wastes above the glittering Principality.
That car was the Lancia Stratos, which won Rallye Monte-Carlo four times in the 1970s, in 1975, 1976, 1977 and 1979.
The first three of those wins were down to Italian legend Sandro Munari, known as ‘Il Drago’, driving for the factory Lancia team. In his day, Munari was unstoppable.
The last of those Stratos wins was maybe more surprising. Victory on the 1979 Rallye Monte-Carlo went to Bernard Darniche, in the private Team Chardonnet-entered Stratos, which saw off opposition from none other than Bjorn Waldegard, in a factory Ford, and Markku Alen, in a factory Fiat. Darniche’s margin of victory was a paltry six seconds.
He was one of the key exponents of the Stratos and of Rallye Monte-Carlo, winning the European Rally Championship and French Rally Championship twice with the Stratos, and also holding the record for the most stage wins on the Col de Turini: Rallye Monte Carlo’s most celebrated piece of road. 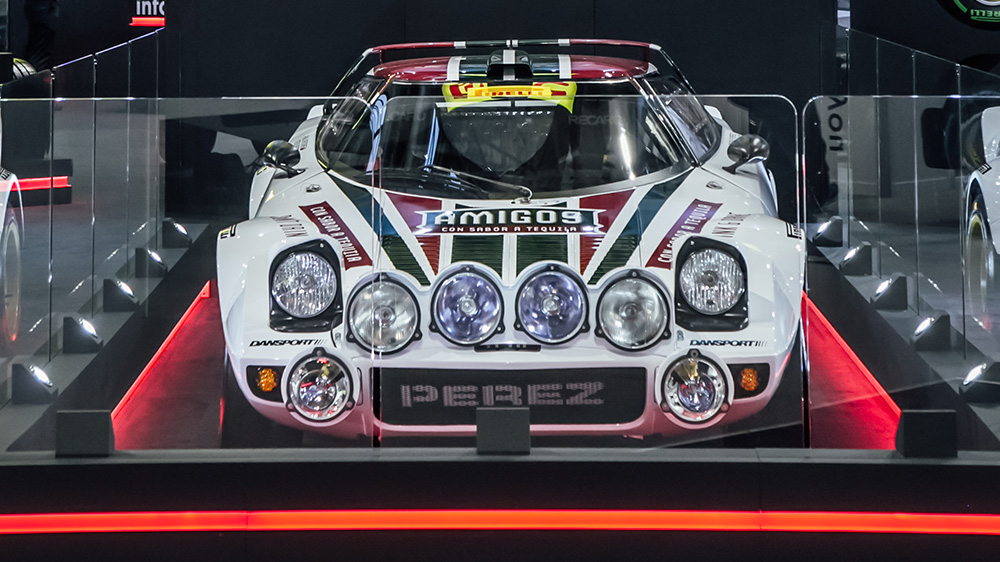 Erik inspired
These days, it’s another Frenchman who is putting the Stratos on centre stage, with the car now firmly established as a piece of automotive history. And that man is Erik Comas, the former grand prix driver who decided to follow his heart and become a rally driver instead. While most drivers take the view that the most beautiful car in the world is simply one that wins, Comas has a far more developed sense of the aesthetic. For him the car has to look beautiful to begin with. Then, if it wins, it just becomes even prettier.
That ideal turned into reality last year, when Comas became European Historic rally champion with the Stratos, beating cars that were much more powerful and recent. One of the key components of his success was the Pirelli P7 Corsa Classic tyres that his car ran on. The Stratos, of course, is central to the industrial history of tyre-making: low-profile tyres were first developed by Pirelli specifically for the Lancia Stratos to go rallying. These days, low profile is an industry standard, but back then it was at the very cutting edge of technology; as was the timeless Stratos itself. For that reason, it took pride of place on the Pirelli stand at the Autosport International Show recently in Birmingham.

Best amigos
For Comas, the Stratos is not just a car, but part of his life. That’s why he came all the way to Birmingham to see it, rekindling memories of his amazing season behind the wheel of the Ferrari-engined supercar.
But the Stratos that was on the Pirelli stand was not exactly the same one that Erik drove to victory in Europe. Instead it belonged to his friend and colleague Steve Perez, a British-based driver who also competes with the Stratos on different rallies all around the world.
At first glance, it looks like Steve’s Stratos wears the traditionally famous Alitalia livery. Look closely, however, and you’ll see that the red, white and green belongs to Mexico, not Italy, and the company it represents is Amigos: Perez’s own brand of tequila-flavoured beer.
It’s a remarkable tribute to one of the most iconic paint jobs in motorsport – and Comas is a huge fan of the Amigos Stratos as well. “Myself and Steve have both had a lot of fun with the Stratos over the years, and this particular car is really beautiful; it’s just been painted,” pointed out the Frenchman. “It’s thanks to passion like this that the Stratos is kept alive and is still competitive now.”

Read more
Related Stories
How to go quickly on Rallye Monte-Carlo… by stopping
race
The Rallye Monte-Carlo
that was won without studs
race
Two champions worshipping at the Temple of Speed
race
MOST READ
Jacques Villeneuve,
the rising and setting of the son