A Spa break
with a difference

The best race in the world? This might just well be the one 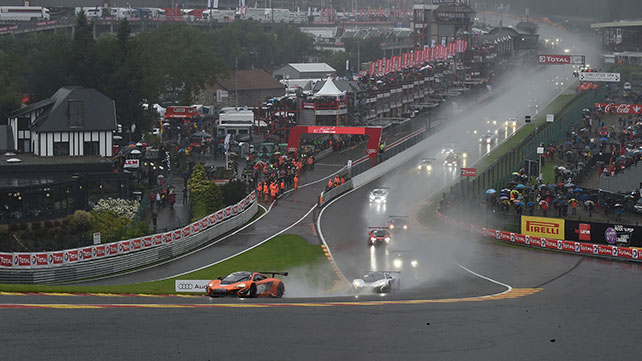 Belgium strikes back
There’s always been something of a rivalry between France and the Belgium: when the French tell a joke, it’s normally a Belgian on the receiving end – and vice versa. So, when the French founded the famous Le Mans 24 Hours in 1923, it was clear that Belgians had to react with a proper endurance race of their own.
And that’s exactly how the Spa 24 Hours came into being, in 1924. The current Spa track is 7.004 kilometres long, but the original road-based layout for the first Spa 24 Hours was a terrifying 15 kilometres long (between the villages of Francorchamps, Stavelot and Malmedy): a similar distance to the famed Circuit de La Sarthe, which started life in a 17-kilometre configuration. The first winners were Henri Springuel and Maurice Becquet, in an obscure two-litre Bignan. Unfortunately for national pride, both the drivers and car were French. In fact, the first Belgian win at the Spa 24 Hours didn’t happen until 1927 – thanks to a Belgian-made Excelsior. As Belgium’s most prominent sporting manufacturer, this was even the car of choice for the Belgian royal family, until the company folded in 1932. Belgian royalty is still alive and well though, courtesy of King Philippe of Belgium, who took the throne in 2013.

From NSU to BMW
From those very early days, Le Mans and Spa took distinctly different directions. While Le Mans went down the road of increasingly powerful prototypes, culminating in the LMP1 cars that we see today, the Spa 24 Hours remained true to its roots by admitting a wide variety of grand touring machinery. As a result, the cars that have graced it in the past include everything from a sub one-litre NSU Prinz, to the mighty Mercedes 300 SEL 6.3 (which was actually bored out by AMG to 6.8 litres).
These days, the Spa 24 Hours is the jewel in the crown of the Blancpain GT Series, for top class GT3 machinery representing the world’s most prestigious manufacturers from BMW (last year’s winner) to Bentley – to name just two examples.
As the Blancpain GT Series is exclusively supplied by Pirelli as part of a long-term agreement, the Spa 24 Hours is actually the Italian tyre firm’s biggest single motorsport event. In total, around 13,000 Pirelli tyres will be made available, transported by 24 trucks, and involving 112 Pirelli personnel on the ground – plus many more behind the scenes. As well as key motorsport staff from Italy, expertise from countries as far afield as the United States, Brazil, Argentina and Australia is flown in: all territories where Pirelli has a key presence in major GT or stock car championships.
These people will work non-stop throughout the weekend, with more than 60,000 spectators expected to watch the round-the-clock race.

The ultimate challenge
Although it is a race circuit, Spa offers several types of conditions that are seen on normal roads: a variety of asphalt, big changes in elevation and plenty of time spent at full throttle. Spa has a famous microclimate: it’s perfectly possible for it to be raining on one part of the circuit, but completely dry on another part – making it the ultimate test track for tyres.
Around 60 cars now compete in the race, either with three or four drivers. The top teams tend to use just three drivers while those further down the order often go for four. There’s a sprinkling of star names too, including some previous Le Mans winners and Top Gear presenter Chris Harris, who spends almost as much time at racing circuits as he does behind TV cameras.
Professional or amateur – and the beauty of the Spa 24 Hours is that there’s room for both – it’s a formidable challenge, thanks to rapid corners and epic compressions such as Eau Rouge. One of the key characteristics of Spa is variable weather, which adds another element of unpredictability. As everyone says, the main result is just getting to the chequered flag. Because of that, and the long tradition of the race, there’s a degree of sportsmanship rarely seen elsewhere. Quite possibly the Spa 24 Hours might just be the very best race in the world.

Read more
Related Stories
The art of being
everywhere at once
race
Hockenheim thanks Niki
race
Nürburgring
in flames
race
MOST READ
Jacques Villeneuve,
the rising and setting of the son