A Pirelli engineer in miniature at the Spa 24 Hours

We meet Darryll Jones, one of the stars of the Spa 24 Hours with his ‘little plastic dude’ 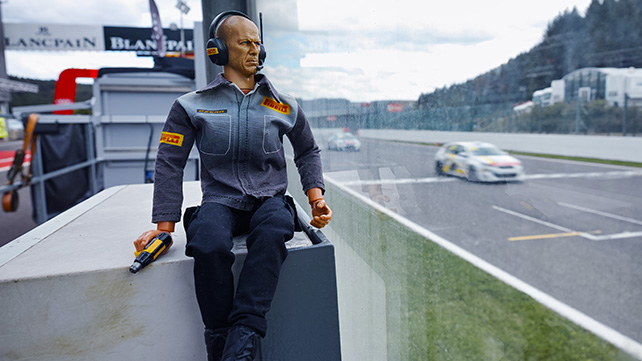 There’s no specific rule that says you have to be a certain body type to become a Pirelli engineer: they come in all shapes and sizes from tall to short to skinny to muscular. Nobody is discriminated against because of their physique, although physical fitness certainly helps. So, what if we told you that one of the engineers at the Spa 24 Hours was only 30 centimetres high? That may sound like we’re taking equal opportunities to an extreme, yet at the same time it’s (sort of) entirely true

‘Mike the mechanic’ and Darryll Jones: the stars of the Spa 24 Hours
Pirelli’s latest recruit for the Spa 24 Hours goes simply by the name of ‘Mike the mechanic”. Otherwise known as the ‘little plastic dude’ belonging to Darryll Jones: a South African content creator who was Pirelli’s guest in Belgium.
He certainly looked the part: dressed in an engineer’s uniform and with headset clamped to his miniature ears, watching the Blancpain GT cars rush past in a 24-hour blur of adrenaline.
While Mike was getting some rest after his shifts in the pitlane and fitting area, we met his ‘owner’, Darryll.

Darryll, where did the idea of the ‘little plastic dude’ come from?
“I moved from South Africa to England nine years ago; I was always interested in photography and the landscapes in the country I had moved to were very different, so I went around taking photos. The idea of the little plastic dude came to me in winter: it was hard to go out and photograph landscapes as the sun went down so early, and so I began to build Lego photography dioramas in Lego, one of which featured Darth Vader. When Instagram came along, I decided to start publishing the photos and there was an incredible response. So, because of that really, I started to play around with all the different action figures I had and devote myself entirely to this hobby.

So, Spa was a special occasion for this particular plastic dude, when he became a Pirelli engineer and watched an amazing race from the inside. How did he find it?
“Mike had a great time. From Friday morning, he began to make his way around the circuit, meeting mechanics, engineers, team managers and lots of other people. I was really pleased for him! The thing that struck me most was the way that everyone reacted: everyone wanted selfies, photos and just to know what the story was all about. I think he really made people smile and gave them something to be happy about. So, I’m delighted that the whole motorsport community welcomed him in this way.”

And how about you?
“Me? I’m only the photographer… No, seriously, I’m always at home when I’m photographing my characters and I love witnessing peoples’ reactions to them: I just feel like a kid again. I took the opportunity to visit the pit garages and the Pirelli fitting area: there’s so much to see. Especially if your perspective is only 30 centimetres high!”

What will you remember most about your long night at Spa?
“I watch Formula 1 on TV from time to time, so seeing a race like Spa from behind the scenes was really interesting. The things that made the biggest impression on me were the media centre, with all the journalists, and I was also really struck by all the team lorries and the quantity of tyres: 13,000 Pirelli tyres, with each team changing them every hour – incredible. Myself and Mike also had an amazing moment together: I went to take a photo of him at the barriers next to the circuit, so close to the cars, and seeing their sheer speed from such a privileged position was just an unbelievable adrenaline burst that I won’t forget.”

What will you remember most about Pirelli?
“The warm welcome we received from everyone involved, the passion and commitment that all Pirelli employees have towards their jobs, and the feeling that Pirelli is a fundamental part of their make-up: a way of life more than just a job.”

Read more
Related Stories
Mike “The Mechanic” is the star of #24hrsnonstop
race
More than 13,000 tyres, 112 people and 64 competing cars
race
The toughest race in Pirelli's world
race
MOST READ
Jacques Villeneuve,
the rising and setting of the son