A Huracan that blows
all over the world with Pirelli 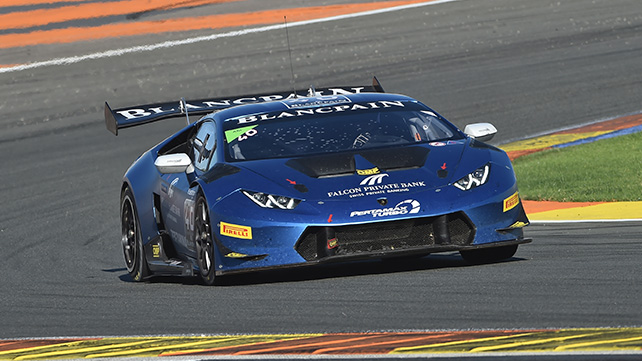 Back to Valencia for the World Final
The Lamborghini Blancpain Super Trofeo has grown into one of the most popular one-make racing series, with championships for Europe, Asia and North America where drivers go head-to-head in identical Huracan models fitted with Pirelli tyres.
Since 2013, these regional series and their competitors have come together at the end of the season for the World Final. Having started off on home soil at Vallelunga in Italy, this event has since visited Sepang (Malaysia) and Sebring (Florida), and for 2016 returned to Europe and Valencia, Spain.
The permanent Circuit Ricardo Tormo is known better for its motorcycle racing than for cars, so it was fitting that the guest star for the World Finals was Andrea Dovizioso, a winner in MotoGP this season for Ducati (a subsidiary of Lamborghini within the Volkswagen Group). In fact, Dovizioso holds the top speed record at the Valencia track at 335.9kph.
He raced a Huracan with a special livery and the number 100, celebrating 100 years since company founder Ferruccio Lamborghini was born. That same landmark was commemorated earlier this year with a new model: the Centenario.

A festival of motorsport
The World Final is a full-on festival for the Super Trofeo, with 10 races in all across the weekend. On Friday, the first six closed the book on the respective regional series. Danish driver Dennis Lind secured the European Pro title with a win and a fifth place from his two races.
Dovizioso was already off to a good start, coming fourth in his Pro-Am class in race one and then winning in race two, also coming sixth overall.
The North America and Asia series shared the circuit for their races, and it was American Richard Antinucci who won on both occasions.
The World Final began in earnest on Saturday morning with qualifying, where young Italian Loris Spinelli grabbed pole position.
In spite of the cosmopolitan grid, the fight for the win in the opening race was an all-Italian affair. The 20-year-old Spinelli kept hold of the lead at the start, but he was hunted down and passed by his veteran compatriot Vito Postiglione, a former Italian GT champion. Spinelli’s efforts to defend second ended in retirement, with Lind and Antinucci completing the podium.

Wet tyres put the accent on driving talent
The weather in Europe in December is always going to be questionable, even in Spain, and the second and final race for the Pro and Pro-Am contingent took place in wet conditions on Sunday, bringing the Cinturato wet tyres into use.
The benefit of such conditions in such an important race is that driving talent comes to the fore, and it was Lind that excelled to claim World Final glory. Things appeared to be in his hands as he pursued Spinelli throughout for the race win, but when Postiglione made a pass behind for third with just 10 of the 50 minutes remaining, the Italian was back ahead in the points race. Lind responded with the crucial pass for the win.

The cousin of Formula 1® racer Kevin Magnussen, Lind had struggled before this year to cement a career outside of Denmark, but has now swept the board in his debut Lamborghini Super Trofeo season, and can hope to climb the ranks with the brand to the Blancpain GT Series.

Dovizioso at the forefront
Dovizioso has shown his wet-weather prowess on two wheels, and mastered the challenge on four wheels too, finishing race two in second in Pro-Am just behind the champions Andrea Fontana/Lorenzo Veglia. In the separate Am races, Switzerland’s Adrian Amstutz won twice, while Ross Chouest upheld American honour in the Lamborghini Cup. All of these triumphs, of course, were made possible by the Pirelli tyres that have been fitted to every Lamborghini since the company was founded.