A feast of GT racing
at Monza

A huge Pirelli turn-out in Monza for the opening round of the Blancpain Endurance Series, in terms of cars, championships logistics, tyres, and people, was rewarded by a truly memorable race

Racing by numbers
The numbers alone were staggering: 130 cars taking to the track in what turned out to be a glorious weekend of racing (despite pessimistic predictions of rain) for the opening round of the Blancpain Endurance Series at Pirelli’s home circuit, Monza.
Of course, those 130 entries were not all exclusively made up of Blancpain GT cars (although all 130 ran Pirelli tyres). There was also the opening round of the new GT4 European Series as well as the Lamborghini Super Trofeo: the fastest one-make series in the world.
These championships all represent the pinnacle of GT racing at their respective levels. The Blancpain series uses GT3-specification machinery: cars that put out around 500 horsepower and reach close to 300 kilometres per hour on the straights.
The new GT4 championship is for cars of a slightly lower specification, including those from manufacturers not normally associated with GT racing such as KTM (of motorbike and Dakar fame), which is entering the GT4 European Series with the innovative X-Bow, featuring a cockpit canopy hinged from the nose a bit like a jet fighter.
The Lamborghini Super Trofeo has been growing in popularity every year, now featuring the Huracan in a family of championships that take place in Asia and America as well as in Europe. 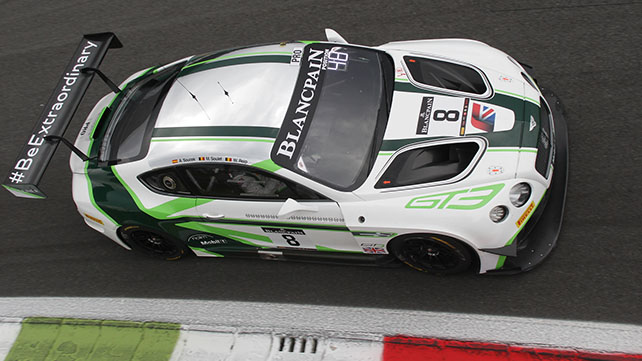 Pirelli at the forefront
All these cars came together at the home of the Italian Grand Prix, equipped with approximately 4720 Pirelli tyres that were brought to the circuit in order to cover every contingency. This required a small fleet of 14 Pirelli trucks to make the journey to Monza: including those that contained everything required to set up an impressive activation area, which also boasted a replica Scalextric Monza circuit, enabling fans to ‘race’ each other throughout the weekend. The monster Scalextric set proved to be one of the most popular attractions of the weekend, enhancing the family-friendly reputation of the Blancpain series, with even some of the professional drivers seeing if they could replicate their on-track form when it came to piloting model electric cars. On the whole, they couldn’t.
Keeping Pirelli’s show on the road required the services of around 78 people, from engineers to fitters to marketing personnel: more than the number brought to each Formula One race, which is also exclusively supplied by Pirelli. And this all goes to highlight the fundamental importance of GT racing to the Italian firm, as the cars that take part are essentially the same as the prestige cars that Pirelli equips for the road.

Shaving paintwork
It’s not just the friendly atmosphere that compels people to come to the Blancpain series though. Instead, it’s the closeness of the racing, thanks to a balance of performance formula (BoP) that ensures no manufacturer ever dominates. The result is healthy grids, with 56 cars lining up for the main race on Sunday, and everyone getting an equal chance to win.
To get an idea of how evenly-matched the competition is, it’s enough to remember that 31 cars were covered by just one second in qualifying. And when it came to the race itself, the top two were virtually nose to tail from start to finish, despite the pit stops and strategies that form an integral part of endurance racing.
In fact, on the final lap, the leading McLaren and second-placed Mercedes touched twice: hard but fair competition that the drivers and the crowds loved. The eventual winning margin, after three hours of flat-out racing, was just 0.3 seconds.
“It was crazy,” said McLaren driver Shane Van Gisbergen, who also won the famous Bathurst 12 Hours with Pirelli in Australia at the start of the year. “The battle for the last 30 minutes was pretty cool. He had a couple of good goes there, but I really enjoyed it. It was pretty tense, I can tell you that!”
That’s what makes GT racing special. If you think that endurance racing is all about going fast as slowly as possible, think again.