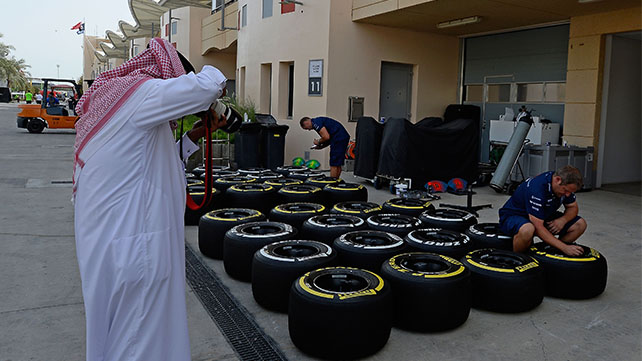 Only a few journalists were invited to the blue-blooded ceremony that spawned the Bahrain Grand Prix. It was October 2002, and the Sakhir Circuit that hosted the first Grand Prix on Arabian soil less than two years later, did not yet exist. In its place was an inauspicious expanse of sand and stone a few kilometres from the capital of Bahrain – but the distance seemed even bigger, thanks to the pomp and ceremony that was the measure of it. Guests were taken to the patch of empty ground in a grand convoy, with minders who were keen to point out the correct protocol when talking to a prince.

The prince in question was Salman bin Hamad Al Khalifa, the leading figure in the local Bahraini dynasty, a great racing fan and President of the local Motor Federation. In short, he was the man who had handed over many, many petrodollars to convince Formula 1 to visit the Gulf for the first time.  No wonder you had to talk to him properly.

“The Prince is not particularly strict on protocol,” we were told. “If he should ask you a question [because, as we were led to understand, no conversation was ever to be started on our own initiative] simply answer using the title ‘Your Royal Highness Prince Al Khalifa.’”

No specific instructions were imparted for a potential chat with the other blue-blooded figure present on that occasion, Prince Andrew, Duke of York: Queen Elizabeth II of England’s second-youngest son. It was he, on an afternoon that quickly turned into a windy evening, who put the lid on the myriad of official speeches, as the first stones were laid on the future Sakhir circuit.

The Bahrain of 2002 was less open than that of today. Memories of that first visit 16 years ago include poor street lighting in the evenings, even on the main thoroughfares linking the airport to the first of the city’s skyscrapers, which have since popped up like mushrooms.

Today, Manama resembles a Western capital. Back then, many instructions had to be adhered to: not least that of attire in keeping with Islamic tradition. One journalist left the hotel in shorts early one morning to go jogging, only for one of the omnipresent security cars to discreetly catch up with him and return him to the hotel with the invitation to practise all the sport he liked – but with a few more clothes on…

Since those early days, not only has Bahrain changed beyond recognition, but its grand prix has also provided a remarkably accurate prophesy as to who will go on to win the world championship.

It happened in the first year (2004) with Michael Schumacher, who won the Grand Prix and was crowned champion at the end of the year. We saw the same outcome for Fernando Alonso, winner of the Bahrain Grand Prix and then World Champion in 2005 and 2006, and again for Jenson Button, who came first in the race and then was champion in 2009.

Sebastian Vettel was first over the line in Bahrain twice in his golden four years at Red Bull; and in 2014 and 2015 Lewis Hamilton was winner in Bahrain and world champion as well. In 2016, the eventual world champion Nico Rosberg won in Bahrain, but the pattern was broken in 2017: Sebastian Vettel clinched the Bahrain Grand Prix but not the title at the end of the year (although he came close).

Out of the 13 grands prix that have been held so far in Bahrain, nine have been won by the man who became world champion at the end of the year. That’s quite some strike rate. So, pay very close attention as to who crosses the finish line first on Sunday.