Formula 1® gets bigger and better in 2017. And a key part of that will be the tyres

A new Formula 1®, with new tyres
So why exactly are we going to bigger tyres next year? For those who look back with fondness to the Formula 1® of yesteryear, the move to wider tyres in 2017 will reintroduce some of the aggression and retro exoticism of the cars from the 1970s and magical 1980s: vehicles that looked like they were only capable of being driven by supermen.
And it’s true that with so much more rubber at the back, the concept of the F1® ‘beast’ is reborn: the new cars will be ground-based missiles with explosive acceleration and cornering speeds that bend the limits of physics. That’s why this decision is the most important step in the technical revolution that has been sanctioned for next year and into the future. It’s a choice that has arisen out of two factors: the desire to make future F1® even more aspirational by creating a bigger emotional visual impact, and managing the increase in performance that the technical revolution will inevitably bring.

How it works
When it comes to talking about technology in motorsport, there’s always the risk of exaggerating in one direction or another: either over-complicating the matter or trivialising it. But in the hope of finding a middle way, here’s what’s going to happen to grand prix racing from next year onwards, as we see it. Formula 1 is facing a popularity crisis and the powers that be have decided to go down the route of adding more performance in order to increase the spectacle. Even now, in the third year of the hybrid era, the cars are about two to three seconds per lap faster compared to last season. Coming up next year is yet another step, with around three to four seconds being cut from current lap times. In order to achieve this, downforce is being increased. After much discussion, teams will be allowed around 15 to 20 per cent more downforce than they are generating this season. So we’ll be seeing cars that are quicker through the corners, although they might not be quite as fast on the straights as they are this year. In order to guarantee sufficient grip as a result of the increased cornering speeds, wider tyres are required. 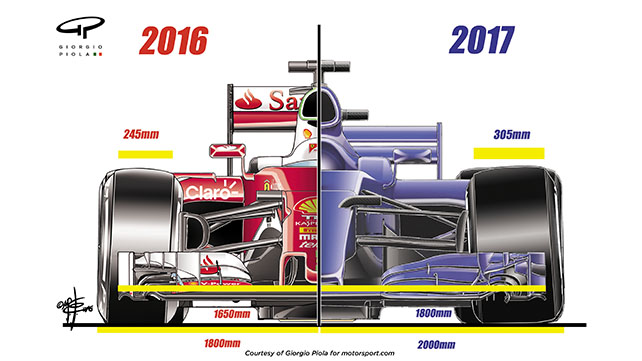 Testing underway
Pirelli has already begun track testing tyres in the current size but with constructions and compounds for 2017, using cars that are two or three years old. From roughly the beginning of August, current or 2015 cars will be tested on track equipped with the first prototype F1® tyres in the new size. And we're talking about a considerable increase: the front tyre grows from 245 to 305 millimetres wide (which is nearly the same width as the current rear) while the 2017 rear grows from 325 to 405 millimetres. The diameter stays more or less the same, with a slight increase from 660 millimetres to 670 millimetres (the same as the current rain tyre diameter, except with a slick rather than patterned surface). The wheel size remains the same as it has always been: 13 inches, giving Formula 1® a unique look that it doesn’t yet want to renounce. Nonetheless, as a showcase of what is possible, Pirelli has already successfully demonstrated 18-inch tyres on track and remains open to investigating even larger sizes in future.
In order to give an idea of the scope of the changes without getting too bogged down in mathematics, the front tyre will become nearly 25% wider, while the rear tyre becomes more than 30% wider. There will be a corresponding increase in the tyre footprint: the amount of tyre that is physically in contact with the ground at any given point. This is where the extra grip comes from, enhancing each car’s ability to put its power down onto the ground, leading to more performance through corners as well as under acceleration and braking.

Enhancing the show
Will this be enough to give Formula 1® that extra bit of spectacle that many people are hoping for? It’s still a bit too early to draw any firm conclusions. But it’s clear that power continues to increase, with the current cars matching or sometimes even exceeding the 800 horsepower threshold, when they make use of the extra energy boosts that the current hybrid systems allow. The 900 horsepower mark is not far off, which will cancel out any speed deficits caused by the increase in downforce, and the drag created by wider tyres. It’s certainly going to be a big step up in performance, putting drivers to the test with higher average speeds and placing the accent firmly on human capabilities. At the end of the day this is what counts: the ultimate barometer of emotion in an astonishing sport that always makes the heart beat faster.

Read more
Related Stories
Stories, myths and
the wheel of fortune
race
Max-imum attack
race
The prince
of circuits
race
MOST READ
Pirelli revs up for 2023 Motorsport season in the U.S.

Pirelli North America is ready for another...