British artist Mark Dickens, whose work has shot to acclaim in the USA, the United Arab Emirates Singapore and Europe, shares with us his colourful insight as Formula One’s commissioned artist 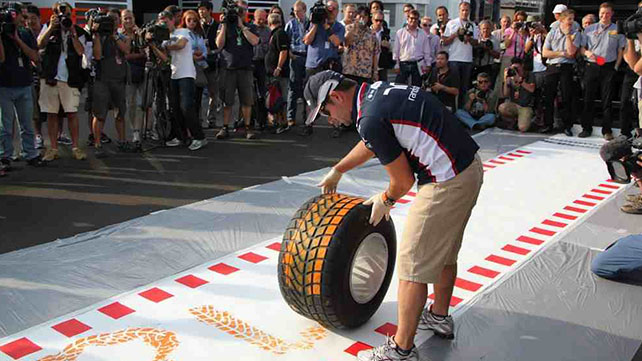 Racing meets art
When it comes to looking at sport in a different light Mark Dickens certainly sits in a privileged position. He isn’t a mechanic, an engineer, a sponsor or a journalist. Yet he is familiar as they come with the teams, drivers and even F1 supremo Bernie Ecclestone. His world consists of colours, layers, stories and art.
“My work in F1 started in 2008 when I was showing with a gallery in London,” he recounts. “They were taking my work out to a new art fair at the Emirates Palace in Abu Dhabi: I was making these big maps of the world incorporating my signature style of layers and photographs. At that time they were developing the new grand prix circuit in Abu Dhabi, so I had an idea to pitch a commission to commemorate the opening of the circuit.”
The proposal was to create ten paintings: one for each team, showcasing the drivers, the teams and also Abu Dhabi itself.  With Dickens’ work being very collaborative, he asked the drivers to hand-write pieces of poetry from the poem ‘If’ by Rudyard Kipling.  As the artist puts it: “To me that poem describes a fine line between winning and losing. I thought that it would be very appropriate to put it into this context of Formula One.”

Back to school
The thought of F1 drivers going back to school and writing lines is an amusing one, but this is exactly what was needed to get Dickens’ first motorsport-themed masterpiece off the ground.
“I’d go to the motorhomes and get the drivers to sit down and write these lines: it was almost like going back to school,” he recounts. “I photographed them handwriting and included these images as well in the work, adding those extra layers of depth. We had the presentation during the first race in 2009 and that’s where Bernie Ecclestone first saw my work.”
It was to be one of those pivotal moments that launch a career. Ecclestone then commissioned Dickens to travel to and create paintings for every grand prix. Not only the races were the focus, but also the host cities and the drivers.

Reinventing the wheel
In 2011 Dickens had an idea to try something inspired by American pop artist Robert Rauschenberg. In 1953 Rauschenberg collaborated with his great friend, the musician John Cage, to ink up the wheels of Cage’s battered old truck with a view to creating a tyre print.
“It was a very simple, big, long, tyre print with these pieces of paper just stuck together,” adds Dickens. “I first remember seeing it in New York at the Museum of Modern Art and that image has always stayed with me. I thought ‘wouldn’t it be great if I could do something similar in the paddock with Pirelli tyres?’”
And that’s how Pirelli’s P Zero Formula One tyres became giant paintbrushes for Dickens at the 2011 Italian Grand Prix, to form an eye-catching new artwork.

Some of Pirelli’s wet and intermediate tyres were ‘inked’ and used as rollers on a 10-metre sheet paper in the paddock. Five drivers were invited to hand-roll the Formula One tyres over the ‘blank canvas’, under Dickens’ artistic supervision.
The resulting work combines a number of interlinked patterns and colours, highlighting the unique design of the Cinturato intermediate and wet tyres to form a one-off souvenir from Pirelli’s first Monza F1 weekend of the current era.

World champions in art
Fast forward and Dickens has spent the last two years working on a project called ‘World Champions in Art’. It’s in collaboration with acclaimed grand prix photographer Keith Sutton to create single-panel, metre-high collage ‘portraits’ of all 32 Formula One world champions.
The unique portraits incorporate photographs, paint, ink, resin and fabric. The project was finished last year and has been sold to Ferrari’s Sebastian Vettel as an entire collection.
“Integral to the paintings were these hand written quotes by all the personalities in Formula One,” explains Dickens. “Drivers, team principals, team members, journalists, everyone. We asked people to write about their favourite driver. Just a paragraph or a couple of lines. Some people wrote half a novel and some wrote a little line, which was perfect.”
And the best one of all? Unsurprisingly, it was from the admirably succinct Niki Lauda. On James Hunt’s portrait, he scrawled: “James beat me by one point in 1976 to win the World Championship. I admire him for this.”

Read more
Related Stories
The new streets for art
life
Serena Williams' success
is a story of sacrifice
and dedication
life
The Pirelli patents:
a tale of invention and creativity
life
MOST READ
Pirelli revs up for 2023 Motorsport season in the U.S.

Pirelli North America is ready for another...